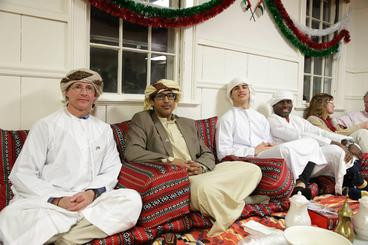 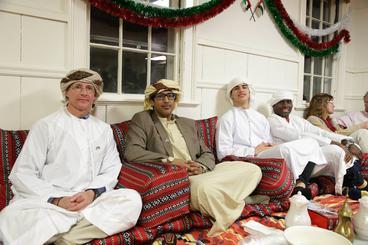 On February 12, 2015, Ahmed Al Ameri ‘15 began a cultural tradition and created a winning SKS Fair project with a dinner from his home country, the United Arab Emirates (UAE).

South Kent School represents over 20 countries. Al Ameri, who famously put together a successful tee shirt campaign earlier this year as part of his Entrepreneurship class, had the idea to celebrate the diversity at the School by starting international dinner nights. He took the initiative to contact International Student Coordinator Jody Lampe and Chef Mike Paciello for help, and both of them loved the idea.

Al Ameri went home over the winter holidays and started to put his plans into motion. He purchased colorful cloth with intricate patterns and with the help of his family, began to sew it into pillows and cushions. This eventually became the foundation for the dining area decor at the first international dinner.

“Sitting on the ground is healthy,” Al Ameri said. He welcomed members of the South Kent community by pouring them tea and offering desserts. He was a gracious host, asking his guests how they liked the cushions and if they would ever want to get up. The arrangement of cushions on the floor made for a special community dining experience, and many people stayed for quite some time to eat and socialize. With so many cultures in a school of just 190 boys, the student-run international dinners are teaching students about how their peers live at home. 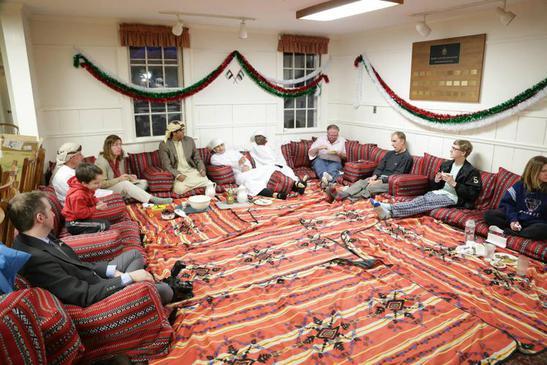 “I think his type of event is absolutely wonderful and it is a new way for us to begin to leverage  our diversity into a more powerful community,” Head of School Andrew Vadnais said. “It's a rare person who can pull this off, especially for the first time.”

Since the UAE dinner, Al Ameri has worked with peers from other countries to hold special nights for Cuban, Kuwaiti, South Korean, and Chinese cuisine. Before the end of the academic year, the boys will also enjoy dinners from Russia and Brazil (May 7th and 19th respectively).

In addition, Al Ameri is currently working with Center for Innovation (CFI) Director and Associate Head of School Richard Chavka to incorporate the CFI Sustainable Agriculture course with his efforts. Since this class is already planting and producing 100% organic vegetables, this partnership is a natural one.

As the organizer of these events, Al Ameri does his best to involve the entire community in his international dinner plans. “The international dinners connect the community with each other,” Al Ameri said. “They help us to respect other cultures, learn how people would eat every day, and think about our similarities and differences.”

For more photos from the UAE dinner, visit our Facebook page here.