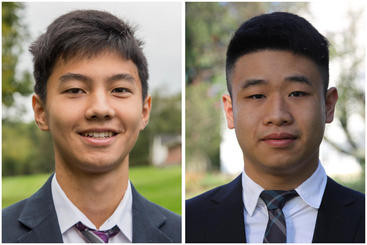 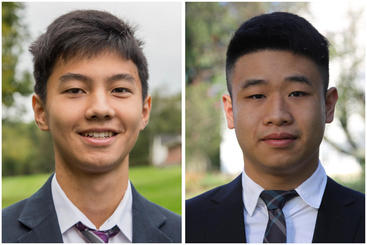 South Kent School is happy to announce that the College Board has recognized two of our seniors as AP Scholars, based on the May 2017 Advanced Placement (AP) testing that was held at the school.

Sixth Formers Yipei Tang and Huaiyu Jiang were recognized for their high achievement on multiple AP tests. Both of the boys are from China. To be identified as an AP Scholar, a student must have a score of 3 or above on at least three Advanced Placement exams. The College Board began this designation in 2011.

Last school year, six AP classes were available at SKS and a total of 40 AP tests were administered. The school allows students to take AP tests if they are studying independently or taking a similar class.

The AP Scholar Awards are academic distinctions that students may cite among their credentials on applications, resumes, and so on. Students do not receive any monetary award from the College Board.
--
The College Board’s Advanced Placement Program® (AP®) provides willing and academically prepared students with the opportunity to take rigorous college-level courses while still in high school, and to earn college credit, advanced placement, or both for successful performance on the AP Exams. According to the College Board, about 22 percent of the 2.2 million students worldwide who took AP Exams performed at a sufficiently high level to also earn an AP Scholar Award.

More than 3,600 colleges and universities annually receive AP scores. Most four-year colleges in the United States provide credit and/or advanced placement for qualifying exam scores. Research consistently shows that AP students who score a 3 or higher on AP Exams (based on a scale from 1 to 5, with 5 being the highest) typically experience greater academic success in college and have higher college graduation rates than students who do not participate in AP.