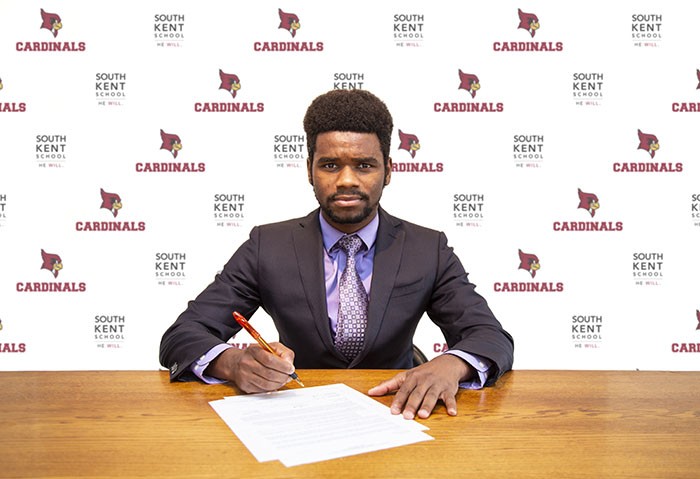 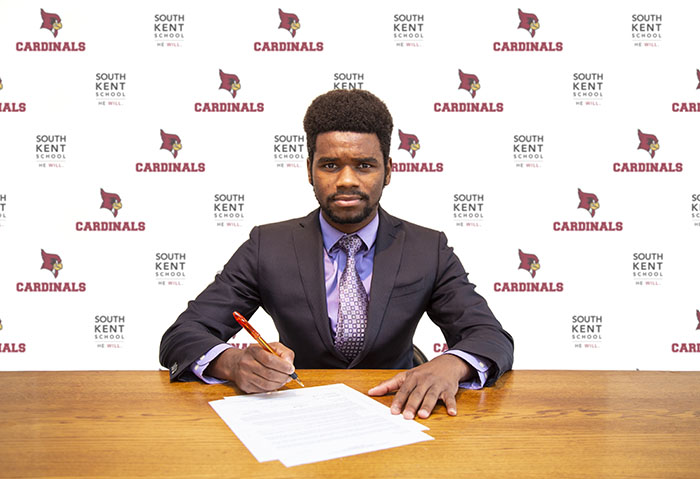 This past weekend our Prep Soccer team finished out their undefeated 2019 season as the Western New England Regular Season Champions, New England Class B Champions, and Top Drawer Soccer Prep School National Champions. For most of the players this would have been the best day of their year, however for one student, a few days earlier may have been even more important. On Thursday, November 14th Prep Soccer student-athlete Hassane Diakho made his commitment official as he signed his National Letter of Intent (NLI) to study and play Division I soccer at Lehigh University.

Diakho, from Dakar, Senegal, joined SKS three years ago and has been an integral part of the Prep Soccer team from day one. “Before I came to South Kent, I could not speak English. I was wondering if I would be part of the community, if I would make good friends, but I did not make friends I made brothers for life.  South Kent is my second home. Being away from home for three years makes me homesick, as any other teenager will feel, but the faculty, the students, my teammates and everyone on campus made a huge impact in my life since I got here. I just want to thank God for everything that has been given to me so far and of course, Owen Finberg who, without him any of these would happen. I feel blessed to know not just the best coach but also such a wonderful person in my life here at South Kent.” Hassane added that, “One of the big decisions to make as a senior is to choose my college. I have been talking with many colleges but what made me choose Lehigh is that I fell in love on my first visit, I saw myself being part of the community. The staff were kind, the coaches showed me how bad they wanted me to play for them and the players welcomed me.  I'm excited to be heading to Lehigh in the fall and looking forward to my career there, on and off the field."

Hassane captained the team this year and was a prominent figure on the field. From his holding midfield position he helped thwart other team's attacks, controlled possession and created chances going forward finishing with 6 goals and 5 assists for 17 points. “Hassane was instrumental in our success this year. His play, combined with his demeanor and leadership allowed our team to reach great heights.” said Prep Soccer Coach Owen Finberg. “Not only is Hassane a great player but he is an even better person. He has been such a positive member of our community since he stepped on campus as a sophomore. His care for others, genuine personality, love for life and work ethic are shining examples to everyone he comes in contact with and I have no doubt that Lehigh will feel the same way.”

Beyond his contributions on the field Hassane is an honor student, a school prefect, and is very active in the South Kent community. He was a lead dancer in South Kent's annual Thriller dance on Halloween for the town of Kent. He has shown his skill on the drums performing in multiple concerts at school. Throughout his time on The Hillside he has also given back to the local community through many different service projects.

All of us here at South Kent School are confident that Hassane will be a tremendous addition to the Lehigh Mountain Hawks. Hassane, we all look forward to watching you succeed in college as you serve as an example of what a thriving South Kent man can bring to this world.