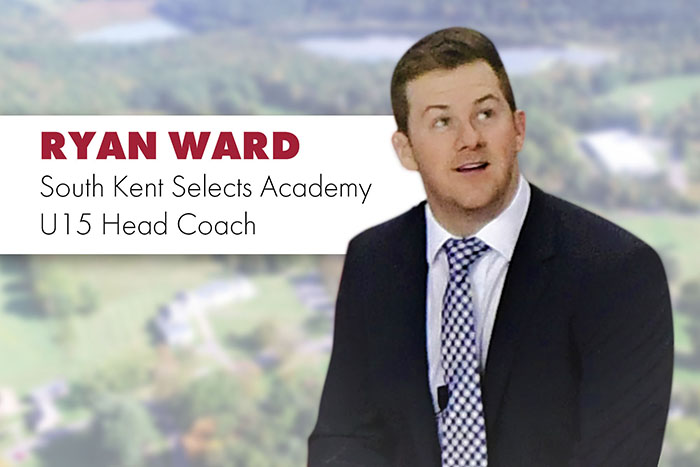 South Kent Selects Academy (SKSA) has hired Ryan Ward as Director of Player Personnel and U15 Head Coach for the upcoming 2019-2020 season. Ward joins SKSA after spending last season as an Assistant Coach for the St. Louis Blues’ American Hockey League (AHL) affiliate San Antonio Rampage. Several Rampage players earned promotions to the Stanley Cup- winning St. Louis Blues throughout both the regular season and playoffs. “We are very excited for Ryan to join our coaching staff” said Hockey Director Doug Holewa.  “His experience coaching at all levels and his offensive approach to the game, specifically his work with the power-play, adds great balance to our staff.”

Ward spent the 2016-2017 and 2017-2018 campaigns as an Assistant Coach for the Ontario Hockey League (OHL) Sault Ste. Marie Greyhounds, in charge of the team’s power-play. In 2017-2018, the Greyhounds posted a franchise best 55-7-6 regular season record, were ranked the #1 team in the Canadian Hockey League (CHL) for a majority of the season, and compiled a 23-game consecutive win streak. After capturing the 2018 Hamilton Spectator Trophy as the OHL regular season champions, the Soo went on to win the OHL Western Conference Championship before falling to the Hamilton Bulldogs in the finals. The Greyhounds led the playoffs in power-play goals with 28 and an efficiency of 29.8%. Two of Ward’s players were selected as first-round NHL draft picks: Barrett Hayton (5th Overall, 2018 – Arizona Coyotes), and Morgan Frost (27th Overall, 2017 – Philadelphia Flyers).

The SKSA teams kick off their season August 30th at the East Coast Classic Labor Day Cup in Salem, NH.

The South Kent Selects Academy (SKSA) program combines top-level Midget AAA hockey with high- level academics. While attending South Kent School, players receive the highest level coaching, exposure and training available while playing a competitive 55+ game schedule consisting of highly recruited showcases, elite tournaments and other league and non-league games across the U.S. and Canada. The program fields three (3) teams each year, U15, U16 and U18, each eligible to compete for the USA Hockey Tier I National Championship.

The program provides some of the very best college exposure in Midget hockey which has helped over 80 players receive commitments from Division I NCAA schools since the program began in 2011.

The SKSA U-18 team won back-to-back USA Hockey Tier I National Championships in 2018 and 2019 and SKSA teams have qualified for Nationals six years running. In addition to the program’s two National titles, it has won many other New England Championships and other Showcases.

Selects Hockey is an elite hockey prospect development program operated by LEGACY Global Sports. Since 2003, Selects has worked with many of the top hockey players, ages 10 to 16, across North America and Europe in the spring and summer, giving them the opportunity to participate in the most competitive hockey tournaments and camps extant. Selects also provides exposure to all avenues of hockey in an effort to facilitate opportunities at the NCAA, Junior and Professional levels. Many Selects alumni have moved on to the highest levels of hockey and education, including over 125 players who have played in the National Hockey League (NHL), 500+ who received NCAA Division I college hockey scholarships, over 200 who played in the World Junior Championships, more than 900 who were drafted into the Canadian Hockey League (CHL) and many more achievements.

For more information about the Selects Hockey program, please visit the website at www.selectshockey.com.