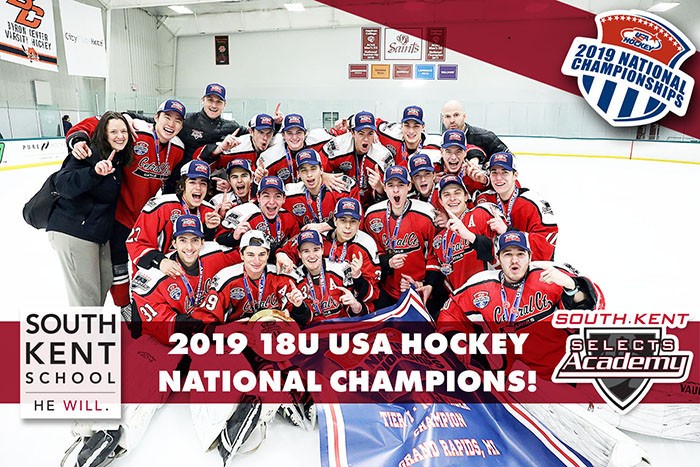 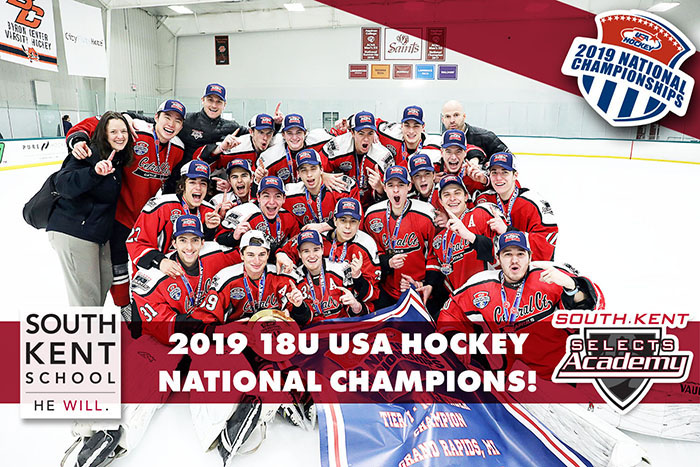 They did it! Our U18 hockey team has won back-to-back USA Hockey National Championships with a 3-2 OT victory over North Jersey Avalanche in Grand Rapids, Michigan. The South Kent Selects Academy team, representing the Central Connecticut Youth Hockey Association (CCYHA), came out on top in the tournament among the 16 best Tier I Midget AAA Youth Hockey teams in the country.

"We couldn't be prouder of this group and their efforts this season and throughout their careers at South Kent,” Head Coach Chris Uber said. “During their time here, the core of this group has had more success than any other in program history and they have been an integral part of taking our brand from good to elite on the national stage.”

Director of SKSA Doug Holewa added, “This back-to-back championship reinforces South Kent Selects Academy’s reputation as the top performing hockey program of its kind in the country. I am proud of our dedicated student-athletes and all of our coaches for their spectacular efforts this season.”

With our team ranked nationally #6 and the Avalanche at #5, it was a thrilling game. The first goal was scored in the second period by Artur Turansky ’20 with an assist from Primo Self ’20, who got a pass from Stephen Kyrkostas ’19. Taking advantage of the momentum, the trio worked together once again in the third, bringing the score to 2-0 with a goal from Self and an assist from Kyrkostas, who set up a pass from Turansky. Although Jack Robilotti ’19 made a goal in the third, it was unfortunately waived, citing the net being off. Still, the boys continued to dominate until North Jersey was able to score with 35 seconds left on the clock. In an unbelievable turn of events, the Avalanche scored again seconds later, bringing it to a tie game at 2-2.

South Kent School faculty, staff and students watched the live stream with bated breath to see if the team could pull off a win after this shocking twist. In a twenty-minute overtime period, goalie Dominic Basse ’19 fought off a number of shots-on-goal. Central CT Selects were tenacious at fighting back the formidable NJ Avalanche, and with just under seven minutes left on the clock, Killian Rowlee ’19 put the final puck in the net with assists from Joe Santoro ’19 and Tatsunori Yuzuki ’19, making their team back-to-back National Champions!

Visit the USA Hockey Nationals website HERE for a statistical breakdown of the game.

The student-athletes on the South Kent Selects Academy U15 team also earned a place at Nationals after winning the New England Regional Championship last fall. Also representing CCYHA, the U15s competed in Plymouth, MI. Starting off strong, they won 6-5 in overtime against the U15-level NJ Avalanche and then won 3-2 versus the Phoenix Jr. Coyotes the following day. Unfortunately, the team suffered a hard 4-3 loss in OT against Neponset Valley, but still were able to advance to the quarterfinals. It was a hard-fought quarterfinal game, but ultimately, Shattuck St. Mary’s U15s took the W with a final score of 3-2. “There are so many people who have played a huge part in these kids’ lives this season, their first away from home, that I cannot list all of them here. We cannot thank the community of South Kent School enough for all of their continued support,” said Coach Jon Hutcheon. “It didn’t end the way we hoped it would, but as this group moves up to 16s next season we are excited to see what next year brings to us on the Hillside.”

Regardless of the final outcome, the U15s come home to a proud community at South Kent as members of the Elite 8 in the Tier I National Tournament.

The U18s played a grueling six games in six days on the way to the championship, the first half of which were part of the “round robin” portion of the tournament. It was a strong start with a 9-1 win over Belle Tire on April 3rd and then a 5-2 victory over the Washington Little Caps on April 4th. Although the team saw a 4-1 loss against the Boston Jr. Eagles on Friday, April 5th, they still were able to advance to the quarterfinals due to their stellar performance in the earlier games. Impressively, Central CT Selects defeated top-seeded Shattuck St. Mary’s in the quarterfinals 8-6 and kept it up with a decisive 6-2 win over Yale in the semifinals. Of course, this led to SKSA’s historic back-to-back National Championship victory!

"They have shown tremendous loyalty to the program, the school and one another,” Uber said. “They are a talented group of individual student-athletes who had countless offers to move on when the program saw change last summer but ultimately they chose to stick together and play for their school, community and one another here at South Kent. This is something for which I will always have respect and be grateful.”

Return to The Hillside

Head of School Lawrence A. Smith ’73 held a surprise assembly on the evening of Monday, April 8th, to share his South Kent pride with the students on campus. “We work very hard at creating a space, a community where young men can thrive in an increasingly competitive world,” he began. “And the most fun I have had at a school was watching our U18s win a national championship in overtime. That was awesome. We work very hard – we always have worked very hard at South Kent – we have a long tradition of athletic excellence. We also have a lot of traditions of excellence in many other areas. Yes, the cause for immediate celebration is the U18s’ victory, but the U15s made it to the national championship among the best 16 teams in the country. That, by itself, is a great success.”

He went on to mention our robotics, soccer and basketball programs, among others. “There are so many cool things that you do here that make us all proud. Howard has asked me four times today if we could have a holiday and each time I told him, ‘Well, we already had one.’ But then I thought about it, and I said, ‘Well, that would be pretty cool.’ So...let’s take a day off tomorrow,” Smith said to thunderous applause, hugs and high-fives from the students. Watch the video of that moment here.

With cardinal and black balloons lining the entrance of campus, South Kent enjoys a day of rest and celebration to cap off a historic season and year.

South Kent School and its partners Legacy Global Sports and CCYHA are dedicated to providing a top-level education along with an unparalleled athletic program that helps prepare young men to succeed in college and thrive as thoughtful and engaged citizens in a rapidly changing and intensely competitive world. This is our program’s sixth consecutive appearance at the USA Hockey National Championship tournament.

For more information from our coaches during the tournament CLICK HERE.