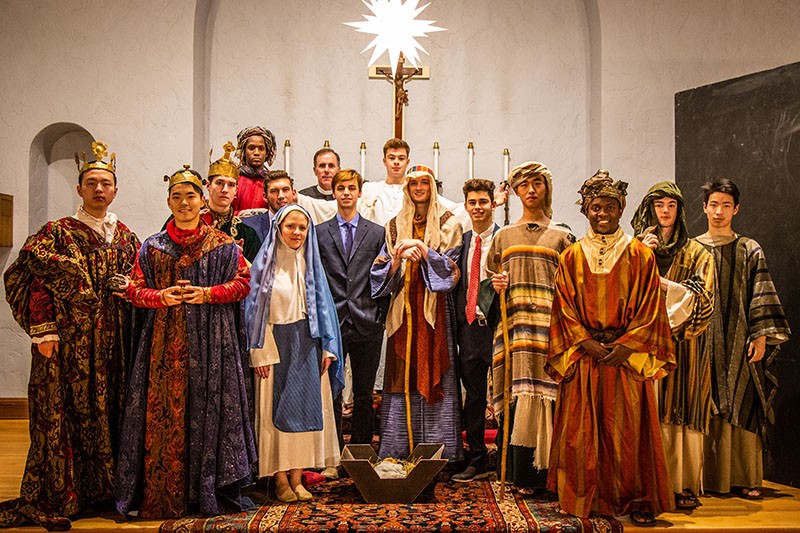 The History of the Nativity Play 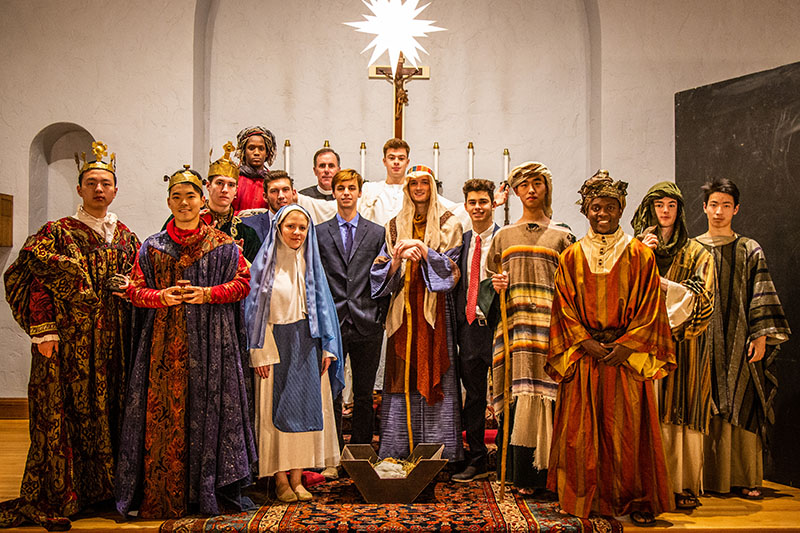 The Cast of the 2018 Nativity Play

We sat down with one of our esteemed previous headmasters, Mr. Noble Richards, to discuss how the South Kent School Nativity Play emerged and what makes it such a long-standing part of the holiday season.

Mr. Richards began his time at South Kent as a student who graduated in 1949. He returned to teach in 1956 and became a headmaster during his tenure which didn’t conclude until his retirement in 1996. Though he spent a majority of his life at South Kent the Nativity Play was something that was well-established even when he first arrived. According to Mr. Richards the person who spearheaded the start of the Nativity Play was one Miss Clara C. Dulon, the first house mother of the school. After a few years of the school remaining all male both in student and faculty body the original headmaster Samuel Bartlett and his staff agreed that the boys needed a female authority figure in their lives as well. Their faith was well-put in Miss Dulon. The 1927 yearbook has a beautiful homage to her:

“During the first two years Miss Dulon was the only woman in school. She directed the kitchen force, planned the meals and served as housemother and nurse. A great deal of the school’s success may be laid to her loyalty and experienced advice.”

The same yearbook, only four years after the school’s founding, shows further evidence of the play being not only something that already existed but was part of the school’s tradition:

“…the Nativity Play, [is] presented on the last night of every fall term, just before we go home for the Christmas holidays. Miss Dulon and Father Kemmis both work very hard to make the Play better and better every year. Several scenes from the Nativity are acted in pantomime while the accompanying Scripture is read from the Bible. The whole audience joins in singing the Christmas Carols, and the result is a really beautiful service.”

The 1929 yearbook sheds even more light on the event, noting how it evoked good will at a time after exams when it wasn’t necessarily expected.

“Every year on the night before the Christmas vacation starts, the Nativity Play is given. This play, stage, costumes, and all, is produced by Father Kemmis and Miss Dulon. The atmosphere at the play is the most significant thing about it. It comes at the time when all examinations are finished, and one should rightfully expect a "rough-house", but it is said that even the most callous persons are impressed by its beauty. Every year someone has come down from Kent to see it.” 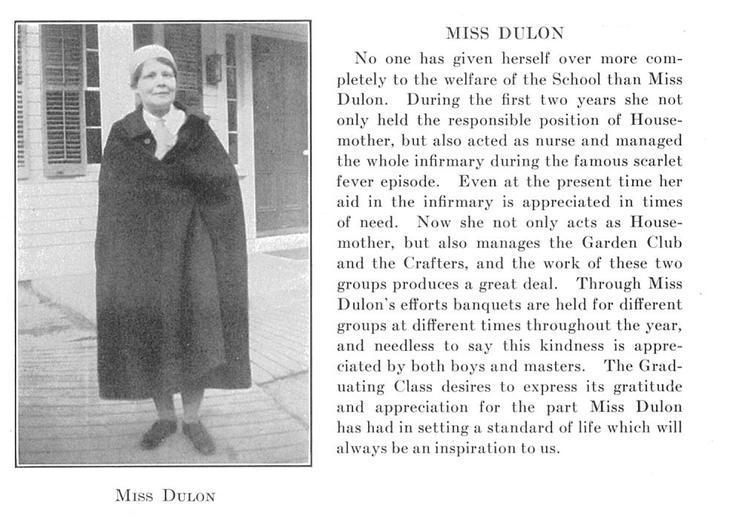 It’s clear that just a few years after the school opened the play was a vital part of the academic year. With the current structure of the school focusing on the Call to Adventure, Call to Explore and Call to Service affinity group trifecta, it’s remarkable that Dulon instituted such a perfect Call to Explore type of activity in the 1930’s. This is one aspect of the event that has added to its longevity. The play gave students a rare opportunity to act and engage in the arts.  It also took many of the boys out of their comfort zone; a key element of the teaching style at South Kent School that remains intact in today’s curriculum.

Beyond the obvious academic and personal growth improvements that one can gain from the arts the Nativity Play has its own set of enduring qualities. According to the current school chaplain, Father Steve Klots:

“The Nativity Play is a great way to mark the end of the term before we go into Christmas vacation, but more than that, there is something joyful, innocent, and moving about the play that embodies the true spirit of Christmas.  We hear the story of Bethlehem, we sing the great Christmas carols--and we all wait with bated breath to see who the kings are and how well they're going to sing.”

South Kent has undoubtedly changed since Miss Dulon started the play back in the 1920s.  Students now come from all over the world and many students do not come from Christian (let alone Episcopalian) backgrounds. There have been some changes in the Nativity Play as well over the years.  According to Father Klots, no student (in his 22 years at South Kent at least) has played the role of Mary; that honor has always gone to a faculty daughter or a girl from the local high school.  In the last few years, the costumes have also received some much needed updating through the hard work of Mrs. Cheryl Moore, the school’s art teacher--although some of the old fabrics are still in use, along with the same crowns of the three kings.  Even so, just as the chapel continues to bring the school together four times a week for worship and prayer or at least reflection on what is important in life, the appeal of the Nativity Play transcends the different backgrounds of the school’s diverse student body.  Says Father Klots:

“The Nativity Play brings us together for a final time in the chapel before we go on vacation, and it ties us to the generations that have gone before us on the Hillside.”

The alumni have just as many positive things to say about the play as the faculty. Peter Bartlett ’77 shared his memories of the Nativity Play:

“As a faculty brat, one who witnessed a number of plays over the years, it was always a mystical, magical evening, with the whole boy playing a woman thing going on, and the Kings processing in or out of tune... Most of all, it meant that the campus would soon be all ours as the boys went their different ways for the Holidays. It is a terrific tradition, made even more memorable by the simplicity and modesty of that wonderful space.”

Another faculty brat by the name of Margaret Walker Smith had similar compliments:

“Somehow, from year to year, the special solemnness of the pageant always came through, no matter who played what part. It was truly one of the highlights of the year."

The current incarnation of the play is no exception. The whole school is united in the chapel and listen intently to the gospels between beautiful hymns that rise up from the pews and fill the building with Christmas joy. Every boy involved from the shepherds to the beautifully singing kings immerse themselves in their role and bring the feel of Bethlehem to the Hillside. We look forward to the continuation of this tradition for years to come and thank everyone who have played a part in this legacy.