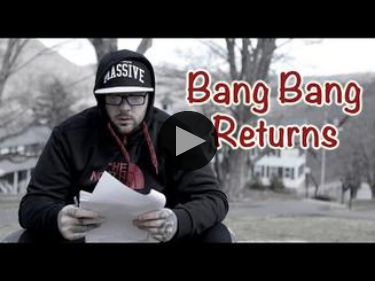 From New York all the way to Hollywood, he’s known as Bang Bang. Here on the Hillside, however, we call him Keith. Since his days at South Kent School, Keith McCurdy ‘04 has become a professional tattoo artist to celebrities such as Rihanna, Katy Perry, Adele, Miley Cyrus, Justin Bieber, Cara Delevingne and more. Recently, he returned to speak to current students about his “Hero’s Journey.” This transformational experience is a vital foundation for the curricula here at South Kent, led by Head of School Andrew Vadnais and inspired by the works of Joseph Campbell.

Now, 11 years after the Class of 2004’s Prize Day, Keith received his diploma in a ceremony back where it all started. South Kent School had the chance to catch up with him as part of the School’s Alumni Profile series. Read below about his story as he reflects on his personal path to success.

South Kent School (SKS): Thank you so much for coming and talking to us. Can you introduce yourself?

Bang Bang (BB): My name’s Bang Bang and I’m a New York City tattoo artist, and I’m here to talk to the students this week.

SKS: How does it feel to be back?

BB: It feels cool to be back. It’s hard to imagine all the time that’s passed in between. It’s cool to see what hasn’t changed, and it’s cool to see what has. I was in chapel a minute ago, and my gut was to put a book under a kid’s butt ‘cause we used to do that, ‘cause I’m still 14 years old [laughs]. Some of those memories are really cool. It’s also unique to see a tree bigger than I remember it, so I’ve caught a couple of cool things so far.

SKS: Tell me a little bit about your background.

BB: I’m from Delaware, and I grew up a child of teenage parents, and a single mom. She was a dancer my whole life. We were really poor and I did really bad in school growing up. In middle school, my father - who I didn’t spend a ton of time with growing up, but who had started to make some money - I told him I wanted to go to boarding school because I thought it would be good for me to stop running around with girls and stop getting in trouble. I wanted to try to take myself seriously and give myself a chance. We toured a bunch of schools on the east coast and I wound up picking South Kent. This place had the structure that I never got growing up, so I did well here--although I was kicked out twice.

SKS: Let’s talk about your departure from South Kent. What happened?

BB: I got kicked out in 9th grade, and I can’t even remember for what, honestly. Then I was like, “Well, alright, that’s what I’m good at.” But, I knew that I wanted to come back, and they gave me the opportunity to come back if I did this summer program. It’s like a wilderness boot camp for kids. It’s 28 days and they take your pants and your boots at night so you can’t run away. It’s in the middle of the mountains, you hike every day, and it’s hell. You start your own fire with your hands. It’s designed to break kids into conforming. So, I did well and I got back into South Kent and ironically enough, my parents agreed to let me get a tattoo in 10th grade if I made honor roll. So, my first report period here, I got straight A’s and B’s. I did really well, so I got a tattoo. I came back in 11th grade and I was on a short leash from being kicked out in 9th grade. So, in 11th grade, I cheated on a Spanish test. They were really lenient with me in some ways - they let me get out of sports so I could work on my art in my junior year as I focused on college applications. They were great, but they weren’t lenient about cheating on Spanish tests. So, I got kicked out for the final time in 11th grade.

SKS: What was your overall experience like at South Kent?

BB: It was great. It was very indicative, for me, of what I would turn into in life. I had a struggle conforming and had issues with structure, and I just -- I felt unique when I was here. I liked that they encouraged that in students. I didn’t feel like I got taught one archetype. I felt like I got taught, like - Keith - you know? I loved my experience here and although I wasn’t stoked to be kicked out twice, I’m back. There’s no other school I would visit.

I always had the ability to create art in a lot of different ways: I could draw, I could sculpt, I could create, I could imagine. I always had that thought process, but to be inspired to actually create it, finish it and do the time that it takes to see it through didn’t really happen until about 11th grade here when they let me sit in the art room instead of playing spring sports. And then it was like - I’m sculpting all day! I’d realize I would lose 6 hours of my day on this sculpture, but then when I finished it, it was something I was so proud of. That was the first time I realized that I wanted to create things.

SKS: Can you tell me about your life and career path after you left SKS? 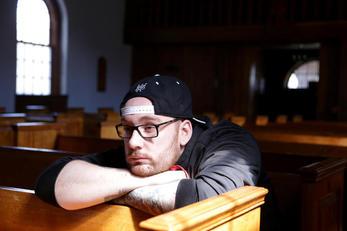 BB: When I left South Kent, I went back to public school in Delaware for 12th grade and I didn’t do well. I went from reciting Chaucer, reading October Sky and building bottle rockets to doing vocab tests with an 80 year-old teacher from a 25 year-old textbook. I was smart enough to realize how stupid that was, so I didn’t give it much effort. It became pretty clear that I was going to drop out and I wasn’t going to continue. I was a busboy at Red Lobster and I had just bought myself a tattoo kit on the internet. I had been teaching myself to tattoo in my mom’s kitchen and after about 3 months of that, I got a job as a tattoo artist. It sounds awesome, but it was outside of a trailer park in Delaware. In hindsight, it was not the best opportunity, but it was the one I had and I made the best of it. 2 months after getting that job - so, 5 months into tattooing - I tattooed guns on my neck with “Bang-Bangs” - kind of symbolic of, like, “No one will hire me now, so I have to become a great tattoo artist.” So, I made the jump and said, “I’m going to do this.” For about a year, I worked there, just learning my craft. I moved to New York when I was 19. My first job in New York City was attached to an adult toy store and also a hot dog store with roaches in the basement. Again, not glamorous. For about 3 years, I worked in some of the worst tattoo shops in New York City - dirty, gross places where you worked til 5:30 in the morning. Really not glamorous jobs, but I just worked hard, stayed focused and just kept taking little steps. When I was 23, my daughter was born, and I worked, and I worked, and I worked. At 26, I became one of the best tattoo artists in New York. Now I’m 29, and I own the best tattoo shop in the world.

SKS: What was the main thing you took away from your time at South Kent? 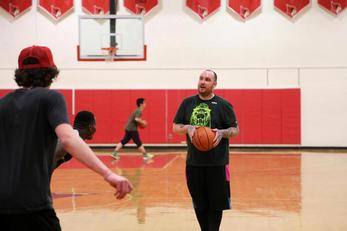 BB: At South Kent, I learned that I was a leader in this place. When I got kicked out, everybody refused to go to school the next day. I didn’t see it, but from I’ve heard, they hung pictures of me all over the place. That taught me that I’m really liked by my peers. There were also teachers who were sad to see me go, just like how there are teachers who are happy to see me come back. I realized my social skills and from that, I got a little bit of confidence in myself. To do something like tattooing takes a lot of confidence in yourself and your ability...to be able to ease someone who is nervous. For me, I think confidence is the biggest thing I learned.

SKS: How do you think you’ll feel receiving your diploma from South Kent School? 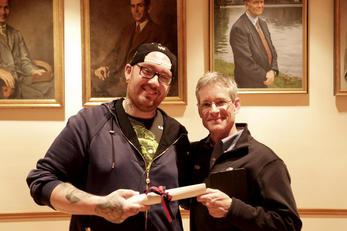 SKS: Do you have any advice that you would give to current and future South Kent boys?

BB: I have so much advice. I have a lifetime worth of advice. Today, in chapel, Father Klots was speaking about not falling into the crowd...not fitting the mold; trying to think for yourself. If I had to give someone advice, it’s just to be yourself and let that true self carry you wherever you’re supposed to go in your life. As long as you’re really you in what you do and what you believe, and you trust in your gut, you’re going to go exactly where you’re supposed to go.