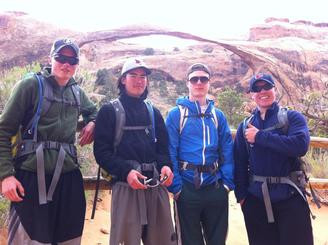 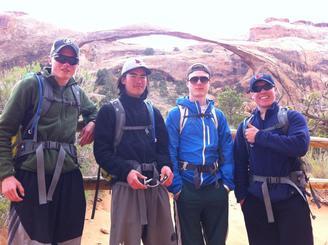 The Call to Adventure has taken new heights! Patrick Bonis, South Kent School’s Director of the Affinity Group program, led a group of four students to Colorado and Utah this spring. In the Call to Adventure, students are challenged to leave their comfort zones and develop the confidence to handle unfamiliar situations while simultaneously fostering a sense of stewardship for the environment.

Students Tristan Elliott ‘14, William Hoadley ‘14, Kento Mayama ‘15 and Brenden Walch ‘14 were chosen to embark on this year’s trek, ready to push their limits in the great outdoors.

“We pulled into High Country, Leadville, CO, the highest incorporated city in the United States, on Saturday April 27th,” Bonis said. “We stocked up on Cliff bars, yogurt, and fruit. We grabbed dinner at High Mountain Pies and then set off to make camp on Mount Elbert's South Trail.”

“When we rolled in, everything was just massive. Coming out of Denver, and into Copper Mountain, there were rocks, mountains, hills and rivers that were bigger than I’d ever seen,” Brenden Walch ‘14 said. “It was humbling because no matter how cool or big you thought you were, you were just tiny.”

Besides adjusting to the altitude, the next goal was to make it to the summit of Mount Elbert, the highest peak in the Rocky Mountains. “Prospects of succeeding began to wane as snow blanketed the area for days following the group’s arrival,” Bonis added.

The South Kent adventurers set up camp and awoke the next morning at  4:15 a.m. to attempt the summit climb. “It was snowing and blowing pretty hard. Once above the tree line, conditions worsened, but we hoped for an opening,” Bonis said. “It never came, and with 50 mph winds and whiteout conditions I made the call to turn back at about 12,500 feet.”

Although they did not make it to the summit, Bonis described his pride in his group for getting up early and making a great effort when no one else on the mountain was doing so. Being in such intense natural conditions taught the students many lessons. “I learned that it takes a lot of heart and mental toughness to climb those tall peaks of the Rockies. I also learned that Mother Nature is going to do what she’s going to do, and we can’t control that,” William Hoadley ‘14 said. “The biggest surprise for me was the size of everything. The mountains were giant, and it was very humbling when we attempted to summit. The mountain just kept on going up.”

The falling snow did not seem to be a problem at the crew’s next destination, Arapahoe Basin (A-Basin) Ski & Snowboard Area in Keystone, CO. “A-Basin boasts some of the highest skiable terrain in the U.S. No condos here - just an iconic place to ski that stays open longer than any other resort in the state,” Bonis said. “The boys seemed to love it, and the snow kept falling all day and the wind kept blowing too.”

Walch had been looking forward to this ski experience long before the trip began. “Arapahoe Basin was the perfect ski experience,” he said. “I’m a huge skier, so to finally go out and not hold back at all was really fun.”

After a day of skiing, the group was Utah bound. “The cool thing was we came out at night. We were in the desert in complete darkness as we went through Glenwood canyon,” Walch said. “We woke up and saw these massive red walls. You could just sit there and stare at the rocks for hours; they are so intricate.” Again, the theme of the sheer size of the great outdoors came into play. “In Utah, the arches and canyons were so massive that I felt like an ant,” Hoadley said.

“We headed to Canyonlands National Park via Gemini Bridges Trail. We then entered the park and drove Shafer Trail to Musselman Arch and then back along the Colorado River under Dead Horse point past the iconic scene where Thelma and Louise drove their car off the cliff,” Bonis explained.

The roads were narrow and steep, and this was just the type of activity that the Call to Adventure uses to get kids out of their comfort zones. “We were at the top of the canyon and at any point it was 1000 to 1500 feet down,” Walch said. “We were hanging out the windows and throwing rocks. You would throw a rock and it would echo off the walls. I’m terrified of heights, but I wasn’t scared at all.”

“That night, we drove into the desert and watched a sunset while driving through Windows in Arches National Park. The boys saw the wonders of the desert, and started to reflect on the wonders they had seen. After the orange, blue, green and yellow drifted into darkness, we drove to the Delicate Arch Trail Head.”

The trip to the Delicate Arch was a highlight for the boys. “The most amazing experience of the trip was the last night: we went and watched a desert sunset and then sat by Delicate Arch under the stars,” Hoadley said. Bonis added, “The stars were crazy! It seemed as if someone dropped the worlds largest diamond collection on a black carpet. I had to drag the boys away, but not before I made a wish on a shooting star.”

Elliot, Hoadley, Mayama and Walch all discussed how they pushed themselves further than they thought they could go. The students bonded with one another and learned each person’s strengths. “The cool thing about being out there with that group is that it was a perfect combination of people who take the outdoors seriously and with respect, but who also like to have fun,” Walch said. “We weren’t on our phones at all. I let my phone die for two days. Everybody had something they were really good at. Kento is a spider monkey: he can climb on anything. Billy doesn’t give up on anything and Tristan is always down for anything.”

In the end, a fun drive back to Denver Airport ensued with good music and much laughter. “It was great to have gone, but all will agree it is great to be back!” Bonis said.

Walch’s feelings on the experience were succinct: “I only wish I could have been there longer. Everything was amazing.”