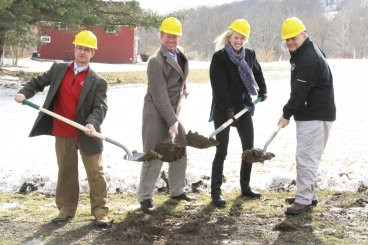 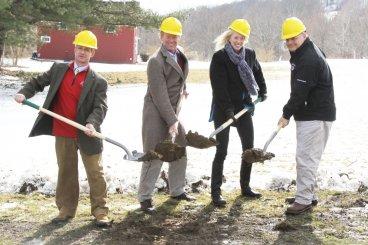 Faculty members of South Kent School and their families will soon be able to enjoy new housing as the school held a groundbreaking for the Richard H. Lawrence, Sr. Faculty Village on Saturday, February 16, 2013.

The Richard H. Lawrence, Sr. Faculty Village will begin with two duplexes and later expand to include up to five buildings. One duplex will have two two-bedroom units and the other will have one two-bedroom unit and one three-bedroom unit, being situated at the top of the hill near Bringhurst Dormitory and the “Wit’s End” house.  Occupancy is planned to take place by the start of the 2013-14 school year.

“We are so glad to be able to honor Dick,” said Andy Vadnais, Head of School. “He has been a dedicated friend of South Kent School for many years and made positive contributions to the school’s development in many areas,” he added. “We are thrilled to be able to provide top quality faculty housing which will help us attract and retain top level professionals and teachers,” he added. The donation will also be utilized to enhance the look of South Kent School, improve the quality of life, and to keep the school at the forefront of educational development.

Dick was drawn to South Kent School for his son because of the long-standing traditions and the ethics the school so strongly instills in its students. He was so grateful for all the school had done to educate Richard that he stayed connected with former Headmaster George Bartlett and the school after his son’s graduation.  He served from 1986 to 1998 as a member of the Board of Trustees and was Chairman of the Board from 1992 through 1995. In 2006 he was the recipient of the Robert J. and Mary Anna MacLean Distinguished Service Award.

It is not uncommon to walk into the Head’s Office or the Alumni Office and find Dick engaging in a conversation about the latest efforts of the school, sharing stories about his family or simply enjoying being on the Hillside. “Dick is delightful and I have enjoyed getting to know him and working with him throughout the years,” Vadnais said. “He is indicative of the heart and soul of South Kent School and we are proud that he is part of our community.”

“In some ways my dad’s connection to SKS has grown even deeper than mine,” Richard said. “He liked what he saw during my time on the Hillside, agreed with the core mission of the school, recognized what a positive influence it could have on young men and stayed involved. For myself, I have come to appreciate the meaning of South Kent School more later in life than when I was there. This is probably why they say education is wasted on the young!”

The traditions and life lessons are two very unique aspects of the school and resonate with many alums.  “I listened to George Bartlett every day discuss the importance of simplicity of life, directness of purpose and self-reliance. These were valuable concepts for me to hear, and I love to support the school in spreading that message to more young men today,” Richard said. “My dad was drawn to these lessons and always gave SKS credit for teaching them,” he added.

Dick was born on April 20, 1927 in London England and later graduated from Groton School, where he overlapped with George Bartlett. After graduation he joined the Army and served in the German Occupation Army. After returning to the United States he attended Yale under the GI Bill and then began his career working at Folkard & Lawrence, a family owned business that imported woolens from Scotland. In 1963 he joined the money management industry with a mutual fund company called Axe Houghton, Inc. that was headquartered in the castle overlooking Tarrytown, NY that can be seen from the various highways. In 1969 he founded with Edward Auchincloss, Auchincloss & Lawrence; an investment management firm headquartered in Rockefeller Center. Auchincloss & Lawrence had a successful history of operating for more than 30 years. Along the way he earned an MBA from Columbia Business School and was elected twice to the position of Town Counselor for Bedford where he ran the Town of Bedford for many years with four fellow elected officials. He also served as Director and Chairman of the South Kent School board of trustees.  He is the affectionate father of three boys, grandfather of eight, husband for over 58 years to Starr, and active member of the Mt. Kisco, New York community.