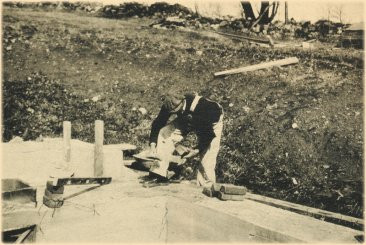 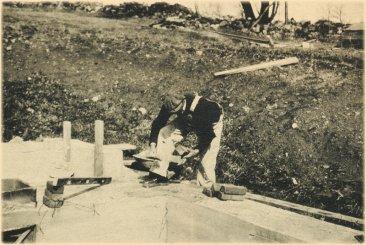 From the South Kent School Yearbook - 1934

At last the South Kent chapel is completed. As the years have progressed the school has grown. The infirmary has been built and together with that the school has received sundry other improvements. Yet not until this year can we say that South Kent is nearly complete in buildings.

We now have our chapel. Ever since the day of the first mass here at school, held in the present dining room, there has been the earnest desire for a permanent chapel. We have grown from the dining room stage up through the room nearest the locker room until we now have our beautiful chapel. With the years, we felt the need more and more for an expansion into a larger building. The old room was getting cramped and we could not enlarge the student body without a place in which we could worship properly.

Fully realizing the difficulty of the undertaking, Mr. Bartlett, together with Father Robertson who was then chaplain at the school, commenced the job of raising funds for the building of the chapel. After months of tiresome work enough was raised for the foundation. This was started and now we knew that our dreams were coming true. We were at last going to have our chapel.

Soon, however, we were at a loss to find further funds for the completion of the job. The money that we had soon ran out and we were left with only the foundations finished. This was all that we could do for almost a year. A few members of the sixth form of that year, anxious for the completion of the chapel, went to Mr. Bartlett to inquire if something could be done about recommencing the work. The latter agreed that surely something could be done, so again he started the task of raising the necessary money.

This attempt was much more successful and within a short while sufficient was raised for the construction of the walls and the roof. The job was again undertaken and work recommenced. Meanwhile nobody had remained idle. Various alumni and parents of the boys had contributed funds towards the finishing of the chapel. The interior furnishings together with the organ had been most graciously donated. The spire had been promised and now everyone felt that sooner than expected we would be using the new chapel.

To lighten expenses, Mr. Bartlett asked the contractor, Mr. H. H. Taylor of New Milford, if the boys could not help the workmen in some way. Mr. Taylor most kindly consented and soon shifts of four of the stronger boys in the school were working, carrying hods of brick and bags of cement. This was a difficult task for some of us but as we could see that something was being accomplished nobody made any complaint. Day by day the walls grew higher and higher and before we were aware of the fact the roof was on. By this time the school year was almost over and our work came to an end.

Again the everlasting question presented itself as to where we were going to get more money to finish the job so nearly completed. Most of the parents had given all that they could and no more could be asked of them. Mr. Bartlett was doing all that he could and in answer to a final plea to everyone, one of the parents said that work should be continued and that he would underwrite the chapel.
This was done with the understanding that in the future he would be repaid. We must not get the idea that everything is paid for and still all contributions will be most gratefully received.

As the student body returned next fall it found their chapel almost completed. The carpenters were finishing their duties but everything else was complete. That night the first service was held in the new chapel much to the happiness of everyone concerned. We now had the culmination of our desires.

Having put so much labor into its construction, the chapel means more to us than we expect. As we think of it we feel very proud to know that we have put such effort into the building of it. The chapel represents more to us than just another building and decoration of the school grounds.

Chapel at South Kent should be the core of the school life, for South Kent is a church school and the services in this beautiful building have more of a bearing on our lives than most of us realize. The chapel is and should be an elevating influence upon us who live here in such close association. Our old chapel, referred to so often as the "catacombs" on account of its strange position, was regarded with great reverence and that same feeling has been carried over into our new and beautiful chapel for the worship of God.