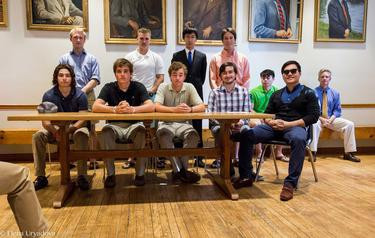 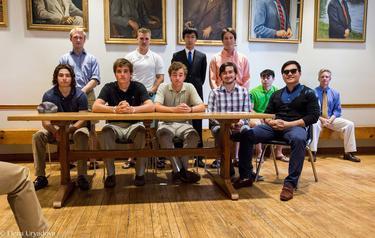 South Kent School’s 2016-2017 prefects have been nominated, declared and chosen!

At a special assembly on Wednesday, May 25, 2016 the annual transition took place where current prefects tapped the new ones on the shoulder, thus symbolizing the transfer of power.

Although many deserving boys threw their proverbial hats in the ring, 5 boys rose to the top. The selections for next year include Max O'Herlihy, Nicholas Scott, Kyle Cafeo, David Cheng and Peter Curry.

Rather than having a single head prefect like last year, due to overwhelming demand for both candidates, two New Jersey natives, Max O'Herlihy and Nicholas Scott will share the role as co-head prefects. Both boys have a huge impact on campus, especially when their accomplishments are put together. Next year's students will have lots to look forward to under their combined guidance, which should bring the brotherhood of the campus to the next level if their speeches are any indication of their goals.

David Cheng of Hong Kong was a crowd favorite at the Prefect Town Hall, making a few jokes before talking about the things he wanted to change around campus.  One of his more memorable points was about missing chapel. Rather than punishing students increasingly for missing it, David said he would go to each and every student's dorm if he had to, waking up students and motivating them. "I want you all to see me like a big brother" he added.

Peter Curry of Pawling, NY had no trouble getting in front of the school and voicing his feelings during the Town Hall. He has performed in choir in front of the whole school earlier that day, so speaking was no problem. Peter is someone who exudes confidence and who has grown immensely during his time on the Hillside. He mentioned how worried he was coming to the school but how accepted and loved he feels now. He wants to help everyone who needs it, and make sure that no matter who someone is, that they feel part of the community as they should.

Kyle Cafeo of Wrentham, MA has been chosen as Sacristan Prefect. He will work closely with School Chaplain, Reverend Stephen Klots, and will be charged with encouraging the spiritual life on campus. This leadership position is selected by Father Klots and the current Sacristan, Will Steele. During his prefect speech, Kyle talked about how his Hero's Journey has progressed and how he wants to ensure everyone else is growing up and maturing in the same powerful way.

The South Kent School community is proud of the new prefects, along with all of the candidates, for being willing to take on this great honor and responsibility.