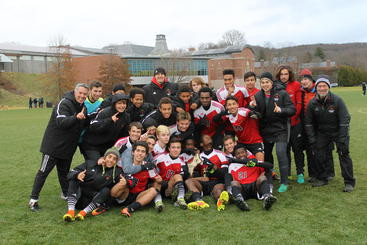 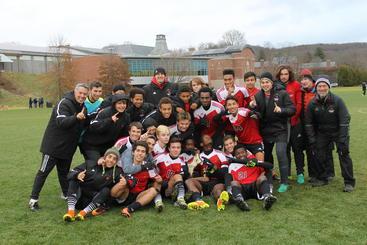 Players and coaches celebrate South Kent’s victory over Brooks in the final.

South Kent soccer wrapped up unprecedented, undisputed back-to-back Top Drawer Soccer National Championships with a 2-0 victory in the New England Final.  The Cardinals beat Brooks School in the NEPSAC Class B Championship to close out a remarkable season with an 18-1 record.

The final match was played on a soaked pitch at Deerfield Academy with the temperature below 40 degrees.  The weather and playing surface helped a Brooks squad that was athletic, physical, and skillful but both teams met the challenge of the difficult conditions to produce and exciting end-to-end spectacle.

Coach Finberg stated, “Any great team must be able to adapt to anything that gets thrown at them. Although it wasn’t our best or prettiest game, these guys found a way to good football and pair it with the determination and grit that it takes to be a champion.” 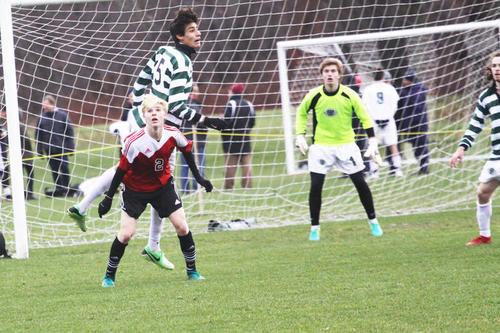 GW goal scorer, Payton Blynn battles for a header in the box.

South Kent got an important early goal when Payton Blynn ’18 finished a perfect cross after an overlapping run down the right side from Mauricio Dos Santos ’17 in the sixth minute.  However, although South Kent expected to extend the lead after the early momentum Brooks gained a foothold in the game and the teams went into halftime with SKS holding a 1-0 lead.

The intensity of the game picked up after half with both teams chasing the title.  South Kent continued to create more chances with Brooks blocking shots and their goalkeeper making some good saves on the Cardinals nine attempts on target.  Although Brooks managed only four attempts on goal, the three in the second half were all dangerous.  Goalkeeper Hunter Kochiss ’19 made a huge breakaway save on Brooks’ best player, Duncan Sutherland, to keep the slightest edge on the scoreboard.  In the 75th minute Franco Guglielmucci ’17 finally broke through For the second goal with a close range effort off a pass from Adrian Lekaj ’17.  Despite the two-goal advantage any misstep would have made for a nervy finish and as expected, Brooks continued to fight to the end.  Kochiss again stopped Sutherland on a breakaway and a great stop by the Brooks goalkeeper on Alex Adjetey ’19 kept the score 2-0 at the final whistle.

The number one seed in the tournament, South Kent cruised to the final with two excellent performances.  In the quarterfinal match, SKS hosted local rival Canterbury and dismantled a team that declined to play during the regular season by a score of 8-1.  Seven different players scored goals and seven players provided assists in a total team effort that saw all twenty-five players play.  The semi-final was a rematch versus a very good Kimball Union team.  Despite getting a second chance a the Cardinals, KUA could only manage the same result going down 3-0 at Loomis Chaffee.  Lekaj, Adjetey, and Kai Cormier ’18 got the goals in a smooth passing, complete performance.

The 2016 campaign saw the Cardinals beat five teams ranked in the Top Drawer Soccer Prep Top 10, including Brooks who finished #5 with an 18-2 record, and one team ranked in the High School Fab 50. South Kent outscored opponents 88-11 and recorded 12 shutouts.

Many players enjoyed standout performances throughout the year to boost the team to great heights.  The attack was lead by Adjetey 15 goals/5 assists, Lekaj 13 g/9 a, and Jai-zel Smith-DeShields 11 g/5 a.  In front of the consistently improving Hunter Kochiss the all-senior defense was impressive, co-captains Tahzeiko Harris and Tomas Jamett lead the team all season along with Tyejae Burchall and Henry Belt. In addition, Juniors Blynn 7g/6a, Nick Berghold 4g/10a, and Vinicius Fernandes 2g/7a had breakout seasons.

Despite our tradition of excellence, each player and each team needs to come out every year and earn what they want to achieve. This year’s group was very talented but worked extremely hard and deserves all of their success.