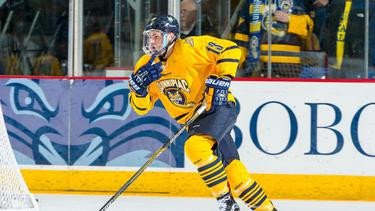 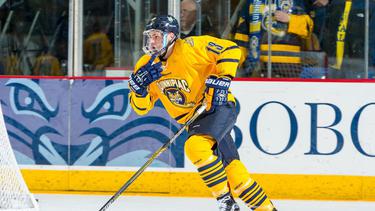 South Kent School alumnus and Quinnipiac University men’s ice hockey captain Chase Priskie ’14 has been tapped as a contender for making it onto Team USA in the 2018 Pyeonchang Olympics. SBNation.com discussed Priskie in a feature titled “Which NCAA Players Could Go To The Olympics.”

Priskie, the first junior to be voted captain since 2010 and the eighth in the University’s history, has had an impressive career with the Bobcats. According to Quinnipiac Athletics, he was the leading defenseman in goals and assists in the 2017-’18 season, helping lead his team to the NCAA National Championship Game. Additionally, he made the ECAC Hockey Third Team as well as the ECAC Hockey Coaches and Media Preseason Teams last year, culminating with a sixth round selection in the NHL Draft by the Washington Capitals.

In his time on the Hillside, Priskie served as captain as well and was named Most Valuable Player on both the U16 and U18 Selects Academy at South Kent School teams. Off the ice, Priskie won the Underform Award in Science for his work in Anatomy & Physiology and is said to currently be studying finance with a minor in computer science at Quinnipiac.