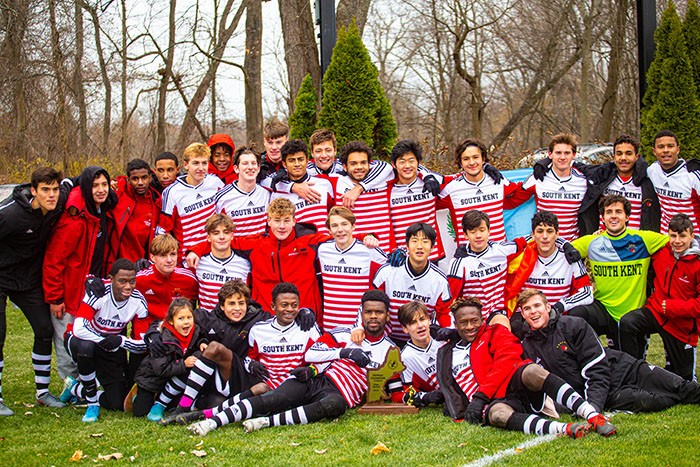 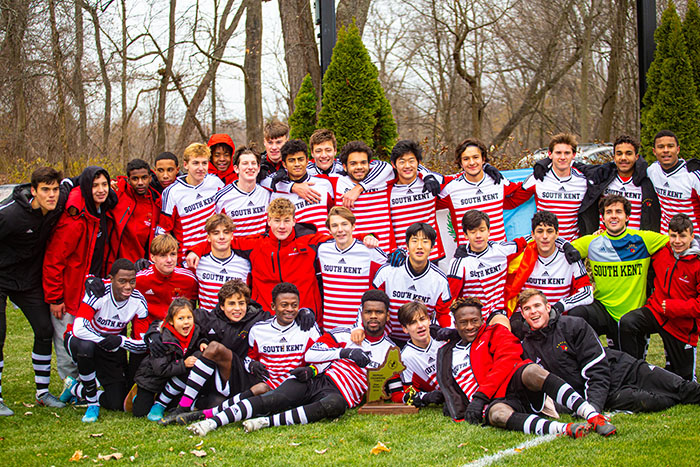 Undefeated: the Cardinals have done it again! By going undefeated through their season, for the third time since 2011, South Kent Prep Soccer has proven that they have what it takes to go toe to toe against the top teams in the country, and dominate. This 19-0 season represents the 4th National Championship, the 9th New England Championship and the 12th Western New England Regular Season Championship for the school.

After a stellar regular season where the Cardinals secured the 2019 Western New England Championship, the New England playoffs started at home against Westminster with the hometown crowd lining the field and cheering on the boys. The Cardinals ultimately overwhelmed the Martlets in a 7-2 victory. Leading scorer, Jai Bean, and captain, Hassane Diakho, both had two goals. Mohammed Seidu assisted on the opener and scored the game winner. Pierre Spiegel and Steven Pickering Jr. also tallied, and Gustavo Iasi and Alejandro Giner added assists.

South Kent next hosted Williston North Hampton School in the semifinals, a rematch of last year’s quarterfinal. Williston came into the game with a strong 9-3-3 record, however the Cardinals finished the game victorious, winning 4-0.  Alex Quinones calmed all nerves with a beautiful opening goal just twenty seconds into the match. Pierre Spiegel secured the second goal before half with Joshua Bolma assisting on both goals. Mohammed Seidu and Steven Pickering Jr rounded out the scoring and Jimmy Johnson and the back line held tight.

Moving onto the finals South Kent played against #2 seed Noble and Greenough at neutral site Loomis Chaffee. A great individual effort from Alejandro Giner put the Cardinals in front. After giving away a penalty kick that knotted the score, Quinones tapped in before halftime after great work on the left side from Kymani McNeil. Quinones would extend the lead shortly after half before a bad bounce allowed Nobles to make it 3-2. However, the quality of South Kent shined through as they played beautifully and added three more from Quinones, Bean and Caleb Ockman. “Once we got rolling and had a little rhythm and were on form, we had a real attacking juggernaut this year.” said Coach Owen Finberg, “I told the guys, ‘if you stay true to what we train everyday, then over 90 minutes it is going to be hard for anyone to stay with us.’”  After many thrilling plays, a few close calls, some fanatic goalkeeping, and very strong offense, the Cardinals won with a 6-2 victory, securing the  2019 NEPSAC title and completing their undefeated season.

The Cardinals last championship was in 2016, and after two years of making it to the playoffs, but losing out, South Kent is thrilled to be back on top again. Graduating Sixth Formers and Post Graduates are sure to remember this as the ultimate culmination of their high school careers, and the underformers will be fighting hard next year to maintain South Kent’s reputation and to go out on a high point of their own. Congratulations to the boys, Coach Finberg, his assistant coaches, and the whole community who worked so hard this year to bring the Cardinals back to the very top and secure this momentous success!

Brian Newsome
So unbelievably proud to be a part of a truly amazing legacy. Keep it up coach and enjoy this time boys!! GO SOUTH KENT!!!
Reply