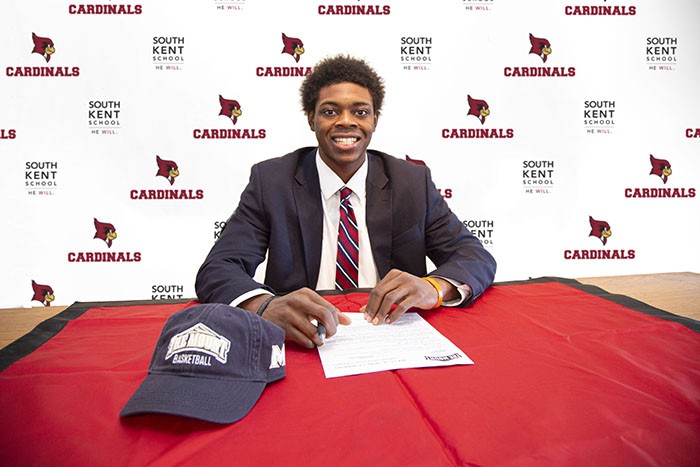 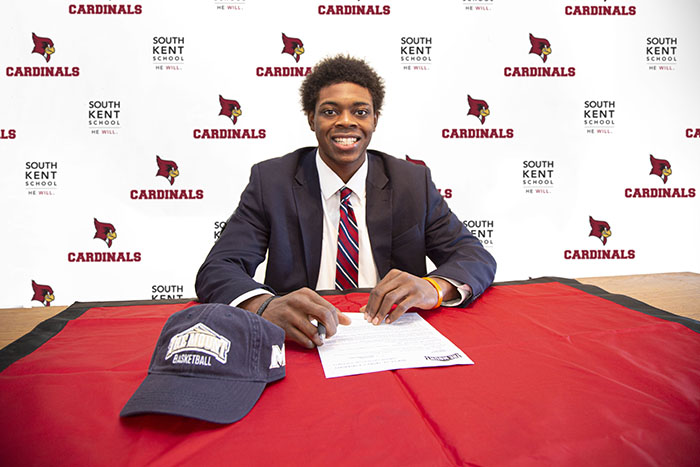 Signing Day is always an exciting time of year for student-athletes as it marks the first time that they can officially commit to the colleges that have been pursuing them. This year Joshua Reaves was happy to sign his commitment to play for Division I Mount St. Mary’s University.

Coach Bill Barton has had the honor of coaching Joshua for the past two year, “Josh has worked as hard as anyone I have ever coached to make himself into a Division I Basketball Player. Over the last two years he has spent countless hours in the gym and weight room. Josh is a dynamic player and a leader at South Kent and I am confident that he will do the same at the Mount.”

Reaves, a Post Graduate from Hamden, CT, is just starting his second season here with the Cardinals. “South Kent has prepared me over the last two year to become more independent and open-minded. In both the classroom and on the court I’ve learned so much on what becoming a man is all about and what giving back truly means to a community. I am glad I chose this school and I would not change my decision if I could do it again.” said Reaves. In planning for his future Josh had this to say about why he chose Mount St. Mary’s University “I chose Mount St. Mary’s University because the school is just like South Kent, independent and somewhere I can just focus on my studies in the communication department and basketball. The school was so welcoming and the team was as well.”

Josh’s signing was witnessed by Coach Barton, Coach Callanan, and the whole prep basketball team. When Josh looks back at his basketball career we are sure he will remember the support of his coaches, teachers, and fellow players as he signed that slip of paper, taking this next big step towards his future. Everyone here on the Hillside is looking forward to cheering Josh on through his last year here, the 2019-20 season, and beyond.

Posted in the category Athletics.

Dick Cuyler
I really enjoy the news from SKS and hope I and classmates can return for the '23 festivities. Thank you much, Dick Cuyler'48
Reply