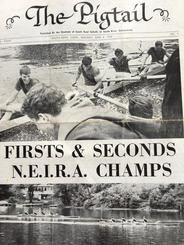 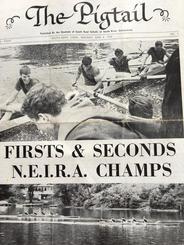 The cover of our very own Pigtail Newspaper declaring the victory!

Saturday, May 28, 2016 marked an important anniversary for South Kent School. That day, fifty years ago, the South Kent School Crew won their first and only National Title after posting a 32-5 record throughout their standout season. The rowing team at the time included First Boat boys Charlie Robertson, Freddie McCoun, Russ Pope, Frank Whitney and Rob Bauer and Second Boat boys Captain Jeff Coes, Skip Newhall, Phil Walker, John Dunn and John Blunt. The team was coached by Bruce Small and Charles “Chick” Willing. Bruce Small was recently called a “genius” by the men who once were under his tutelage. Some of this genius is more apparent than it might seem, as the #1 boat going into the season ended up being the #2 boat at the end, with the coach making the vital change that eventually led to their National Title. 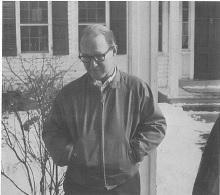 The 1966 Crew season took place as many had before it, with the boys conditioning themselves constantly on nearby bodies of water. It was a humble program, far smaller and less funded than some of the schools they would face off against, but the boys weren’t fazed.When the team was first assembled, the biggest guys were initially put in the First Boat. But it became clear that their power wasn’t always helpful. The boat would sometimes drift to the starboard side of Robertson and McCoun because they were stronger than the Portside combination of Bauer and Pope. Bruce Small, being the excellent coach that he was, adjusted accordingly. The coach also outfitted the Pocock shell they had with a new Italian rig that along with the shifting of positions for the boys, had immediate impact. Rob Bauer spoke about the noticeable difference the changes had. “Right after the change, we started to fly down courses in a straight line. We also suddenly had perfect balance. It was the only boat I ever used in my 5 years at SKS that allowed us to all have our oars out of the water and still stay straight.” Rob and the other members of this new Second Boat soon started to become faster than the first, and thus, overtook them as the lead boat. 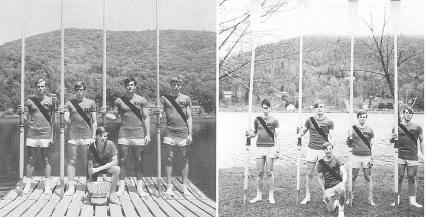 The First and Second Boats from the 1966 Season

With this change made early on in the season, the boys soon became unstoppable. The boys set records en route to the New England Interscholastic Rowing Championship Regatta held at Lake Quinsigamond on May 28, 1966 including winning the Founder’s Cup for the second year in a row. Despite National Championship team Haverford being present at the Regatta, the SKS boys still felt little competition as they beat that team and many others by 3 lengths or more. “The outcome was never in any doubt, “said Crew Captain Jeff Coes. “We were superbly conditioned due to countless hours on the water, we could sustain our strokes per minute during the stretch drives when the other boats were fading, and with Bruce Small’s devotion including bringing innovative boats and oars to the school, we had no doubts that we could secure the title.” Both the First and Second Boats for SKS crossed the finish line before any other boat in the competition, and the boys had captured the title as a team. 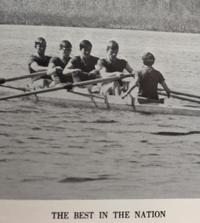 After winning the tournament, there was but one challenge left: The Wyfold Cup in England.  The boys trained hard for several weeks on the Housatonic River before making their way across the proverbial pond. For many Crew members, it was their first time overseas. The Wyfold Cup was an event for coxless fours from various colleges and clubs. During the event, the boys went back to using their conventional rig rather than the Italian one they fell in love with earlier in the season because the coxless four setup used a boat that the Italian rig was not compatible with. Though this change led to some hiccups, none were too hard for the superbly conditioned group to overcome. The team defeated several college-age teams and only lost to one group during their races in the quarterfinal round. Though they couldn’t capture an international title that year, they came tantalizingly close and still had the most impressive season in the history of the Crew Program. Some of the boys from the team, now men, wonder if the outcome would have been any different had they been in the same boat and rig setup they used the rest of the season. Sadly, we will never know. But despite that last loss at such a high level, the season itself will never be forgotten. Attaining a National Title in such a competitive sport with a small program like ours will go down in history as one of SKS’s proudest athletic achievements.

Posted in the category Alumni.