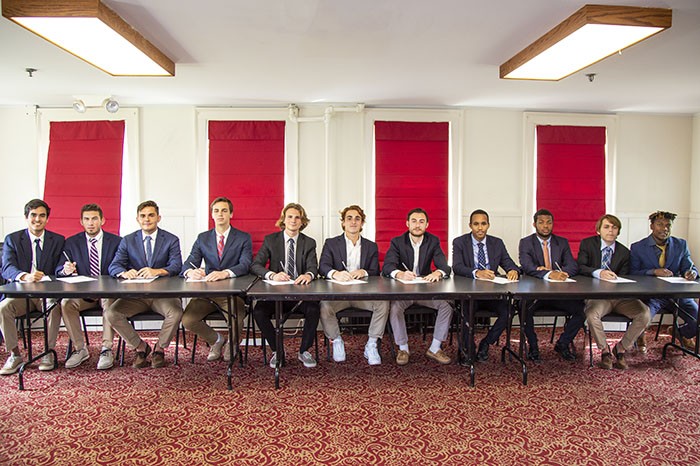 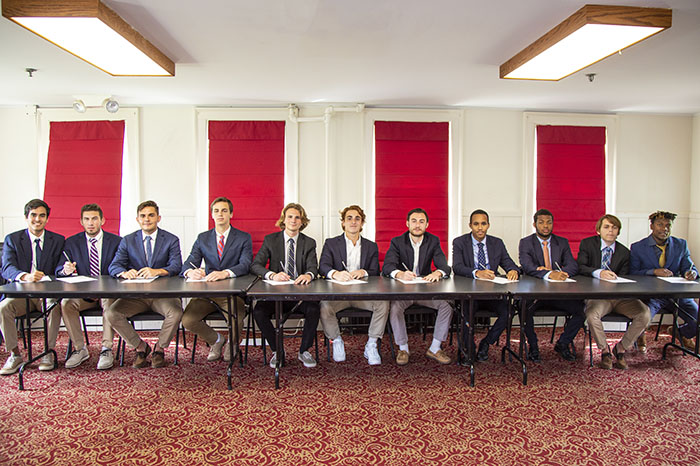 As the South Kent School Class of 2019 earns their diplomas, all graduating members of the soccer program will be looking forward to continuing their careers as student-athletes at the collegiate level.  For the eleventh consecutive year, every graduating soccer player has an opportunity to play college soccer.  This year, thirteen graduates will move on to be college student-athletes.  South Kent recently held a ceremonial signing event to celebrate the accomplishments of this impressive group.

Hunter Kochiss (Shelton, CT) has been a three-year starter in goal for the Cardinals.  After leading the team to the National Championship as a sophomore, Hunter racked up multiple individual awards and earned a place at Manhattan College.  Kochiss reflected, “Playing and studying at South Kent helped prepare me for the next step in my career.  I am grateful for the opportunity I had to play on The Hillside.  I’m sure what I have learned can help me at Manhattan and in all my future endeavors.”

Virginia Tech commit Alex Adjetey (Accra, Ghana) was also a key member of the 2016 National Championship team.  He has been the Cardinals Golden Boot winner, as the leading scorer, two out of the last three years.  He was voted one of the Best XI players in this year’s High School All-American Game.  Alex is headed to a nationally prominent program in the Atlantic Coast Conference (ACC), widely considered the best league in the country.

Grant Nawoichyk, (Tuxedo Park, NY – not pictured) will be the fourth soccer player in recent history to turn post-graduate year at South Kent into an appointment at the United States Military Academy at West Point.  Unfortunately, Nawoichyk missed the season through wrist surgery but will be back on the field for the Golden Knights in August.  He never missed a beat in the classroom and as a future cadet was the leader that one would expect around campus.

Jared “JR” Subarsky (Livingston, NJ) transferred to The Hillside for his senior year.  He played a key role in the South Kent defense this season and will return to New Jersey to play and study at Farleigh Dickinson University.

Joining Subarsky in committing to FDU is Keishon Bean (Warwick, Bermuda).  The post-graduate follows a long line of Bermudian players to move on from South Kent to play college soccer.

Rodrigo Quinteros (Buenos Aires, Argentina) is the lone senior left to decide.  However, he has offers from strong Division I programs Florida Gulf Coast University and Seton Hall.  The smooth central midfielder should decide his destination in the very near future.

The six players that are heading to the Division III ranks have landed at some impressive academic institutions with great soccer programs.

Bobby Dall (Cape Elizabeth, ME) came to South Kent for a post-graduate year after four years at Phillips Andover Academy.  Bobby was one of many soccer players who took advantage of his chance to take Syracuse University classes through our SUPA program.  He found a whole new level of soccer and elevated his game significantly.  After a significant amount of college interest he decided to head home to Maine and play for an up and comer in the New England Small College Athletic Conference (NESCAC), Bates.

Shane Hauck (New Fairfield, CT) will move on to another top soccer school for student-athletes.  The day student will be the third South Kent graduate in recent years to head north to St Lawrence University.

Santiago Bonifasi (Guatemala City, Guatemala) will matriculate to St Olaf College in Minnesota.  The holding midfielder has been a steady presence on the field and a high achiever in the classroom and figures to do the same in the Northern Midwest.

Will Poncy (McLean, VA) is certain to make an immediate impact on the field for Mid-Atlantic power Mary Washington University.  Like Dall, Poncy will head back to his home state after earning a significant scholarship at a highly esteemed academic institution.

Local product Dylan Sock (Newtown, CT) concludes his four-year career at South Kent heading to his top choice, Salve Regina University in Rhode Island.  Sock showed tremendous improvement on the field throughout his career for the Cardinals and played a key role this year.  After a strong spring season with the Beachside Development Academy U-19’s, he should be ready to step in and contribute right away.

Luke Mattessich (West Palm Beach, FL) will take his talents to Denison University in Ohio.  The thoughtful, three-year Cardinal said, “Through my time here at South Kent, it hasn’t always been easy.  There have been challenges I have had to overcome but they have taught me valuable lessons that will help me become successful at the next level and beyond.”

We are extremely proud of the accomplishments that these fine, young men have achieved at South Kent and we look forward to following their future successes.