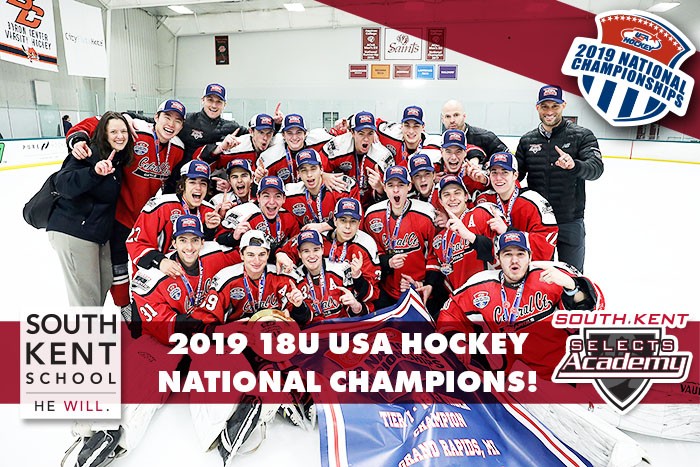 U15 Day 1 vs North Jersey Avalanche

The 15s started off nationals with a 6-5 OT win. Pauly DeSaro scores the game winner.

In overtime Pauly ended it for us with a snipe.

The U18 team opened tournament play with a 9-1 victory over Belle Tire. South Kent jumped out to a 3-0 lead after the first and never looked back. Will Margel, Primo Self, and Joe Santoro led the way with two goals a piece while Ryan Coughlin, Matt Crasa, and Killian Rowlee had one goal each. Dom Basse and Trevor Giwerowski combined to make 26 saves in the win.

U18 Day 2 vs. Washington Little Caps

The U18 team won their second game in as many days picking up a 5-2 victory over the Washington Little Caps. Trevor Giwerowski stopped 19 shots in the win. Artur Turansky led the way with two goals and an assist while Will Margel, Ryan Coughlin, and Hank Mcdonough also scored for Selects. Stephen Kyrkostas and Primo Self picked up two assists each on the day.

The team will wrap up round robin play tomorrow night at 7:30pm against the Boston JR Eagles.

Our 15s played a strong game today from start to finish and were rewarded with a 3-2 win.

It was 1-0 after the 1st thanks to a Cam MacDonald goal. Jack Kurrle and Ryan Greene made it 3-0 in the second period.

Phoenix pressured us hard in the 3rd scoring two goals but we were able to hold them off for the win.

Tonight we lost 4-3 in overtime to the NV River Rats. Goals were scored by Cam MacDonald (2) and Ryan Greene.

Despite the OT loss we still finished first in our bracket and will advance to the National Quarterfinal tomorrow at 12:15pm vs Shattuck St Mary’s.

We suffered a setback this evening but I am confident the boys will rebound and perform to the best of their ability from here on out.

The 18s lost to the Boston Jr. Eagles 4-1 in the final game of the round robin play today.  Matt Crasa scored the lone goal with assists credited to Will Margel and Hank Mcdonough.

CCYHA will advance and play Shattuck St. Mary's tomorrow at 3pm in the quarterfinal game.

This afternoon the 15s season came to an early end with a 3-2 loss to Shattuck St Mary’s in the national quarterfinals. Both goals were scored by Jake Bongo, assists on both went to Oscar Plandowski and Ryan Greene.

There are so many people who have played a huge part in these kids lives this season, their first away from home, that I cannot list all of you here. All 22 of us were new to campus in September including Robbie Murden and me. We cannot thank the community of South Kent School enough for all of your continued support.

It didn’t end the way we hoped it would but as this group moves up to 16s next season we are excited to see what next year brings to us on the hillside for those of us returning.

The U18 team knocked off top seeded Shattuck St. Mary’s 8-6 this afternoon to advance to the semi-finals.

The team will play Yale in the National semi-finals tomorrow at 2:45pm.

The U18 team advanced to the finals with a 6-2 win over Yale this afternoon. Dom Basse has 18 save in goal to earn the victory.

Will Margel led the offense with two goal and an assist while Ryan Coughlin, Nick Dineen, and Matt Crasa all had two point nights. Tats Yuzuki also scored in the win.

The team will face the North Jersey Avalanche in tomorrow’s final at 10:30am.