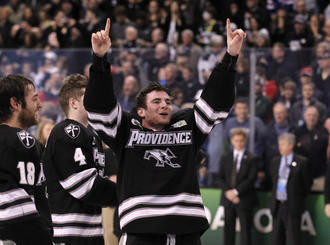 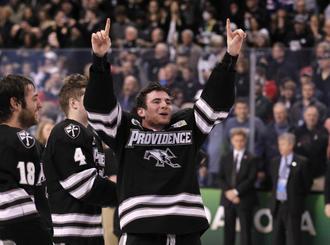 It was an unforgettable night on Saturday, April 11th, for South Kent School alumnus Anthony Florentino '13, who helped his team win the NCAA Division I National Men's Hockey Championship. The Providence Friars won in a thrilling 4-3 finish versus Boston University. It was Florentino who scored Providence's first goal in the final game of the Frozen Four, garnering excitement from fans both in the rink and on social media.

A 2013 NHL Draft selection by the Buffalo Sabres, Florentino is described as a well-rounded prospect who is often praised for his leadership qualities and physical, hard-hitting brand of hockey. He has a heavy point shot that hits the net on a consistent basis. Florentino can skate pucks out of danger from his own zone. Florentino has the prototypical size and attitude of a punishing defender along with some strong skating and technical skills.

This marks the second consecutive year that a South Kent alumnus was part of the winning team in the Frozen Four. As many remember, last year, Shayne Gostisbehere '11 led Union College to the National Championship, was named MVP, and was drafted to the Philadelphia Flyers all within days. In 2009, Joe Pereira '07 (now Assistant Coach for UConn hockey) was part of the Boston University team that won the National Championship.

"To be completely honest, it's such a surreal feeling achieving a goal I have had all my life," Florentino said. "Most of all, this makes South Kent even more popular, having alumni win it back to back years." 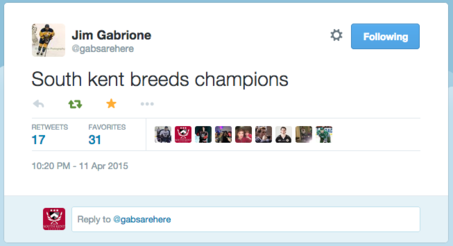 Florentino spoke with South Kent today, and expressed his heartfelt gratitude. "I also need to thank South Kent for opening a door in my life and allowing me to find Providence as a home," he said. "I cannot describe this feeling I have, but I am very grateful to be a part of this program. This team is a group of guys that made it happen as one and as a family."