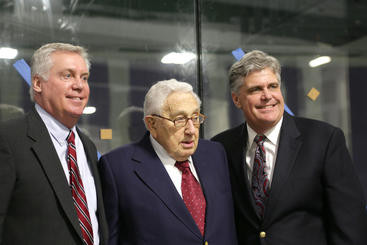 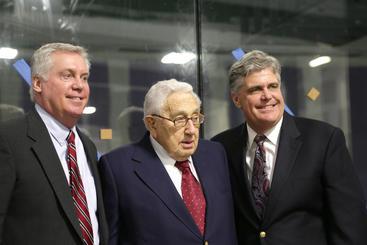 Taylor Stockdale ‘81 not only honored his parents, but also brought attention to the support his brother gave him during his father’s time as a POW. “When my dad went away...I was three years old when he left and I was almost 11 when he came back,” he said. He explained that it was harder for his brothers because they were older when it all occurred. “When I think about South Kent, I loved my years here. But, when Sid was here, as my older brother, he was really kind of the dad to me...So, I know this is The Admiral and Sybil Stockdale Arena, and I think that’s terrific, but to me, it’s also about my brother, Sid,” he added with a round of applause from the audience. His older brother, Sidney B. Stockdale ‘73 said he was humbled and honored to represent his parents and family along with his brother. “My parents’ story is very powerful and it contains important lessons for future leaders of our country,” Stockdale said. “Thank you for keeping their story and the values contained alive.”

Other special speakers included bestselling author of "Defiant" Alvin Townley, two recipients of the Vice Admiral James Bond Stockdale Award for Inspirational Leadership (Vice Admiral James P. Wisecup and Commander Thomas J. Dickinson) and Richard H. Lawrence, Jr. ‘74, who named the rink. Townley spoke of Admiral Stockdale’s leadership among his men in the face of imprisonment. “They never knew when they were going to come home,” Townley said. “They just knew that whenever that day came they were going to return with honor.” Vice Admiral Wisecup charged student-athletes at South Kent “to remember the story here because it has to do with honor and keeping faith with your buddies.” Commander Dickinson praised Admiral Stockdale as “a hero in the Navy and in our country.” Additionally, he also noted his impression of South Kent School. “You have a direct connection with a legacy,” Dickinson said. “This school is something special. This is my first time at South Kent and I can see it. I’m proud of all of these young men who are going to be our leaders in our future.” Richard H. Lawrence, Jr. ‘74, who chose the name of the rink, said he, along with his wife, Dee, and Head of School Andrew Vadnais, wanted “an iconic symbol that would speak to both the essence of South Kent School and also provide a powerful message for the students on the Hillside.”

Chairman of the South Kent Board of Trustees Jeffrey G. Rosenberg ‘80 welcomed guests and pointed out that “this facility represents the growth and the success of South Kent.” Vadnais then introduced former Secretary of State Henry Kissinger, telling the audience that “He was an amazing part of this story.”

Kissinger is an American Diplomat who was the National Security Advisor during Admiral Stockdale’s imprisonment in Vietnam and release. “We are neighbors from just down the road and we’re very proud of you, and I’m especially proud that I’ve been invited to speak here about Admiral Stockdale,” Kissinger said. He went on to talk about Sybil Stockdale’s important work in co-founding the National League of Families of POWs and MIAs. “I met with them every two months. About a hundred women would come into the White House.” Kissinger called the meetings “uplifting.”

Kissinger lauded Admiral Stockdale, who was the highest ranking prisoner-of-war (POW) during the Vietnam War, for his character. “We saw each other over the years and he was always a symbol of the best in America, of what makes this country worth fighting for,” he said. “A man who believed in freedom, who believed in this country, and who believed in the importance of our values around the world.”

“I want to thank South Kent School and all of you for giving me this opportunity to pay tribute to a couple in a time when we are always talking of our divisions and our uncertainties,” Kissinger said. “They are an example of what our country needs, what made our country great, and I cannot tell you how much it means to me to be permitted to say a few words about these two.”

South Kent Chaplain Reverend Stephen B. Klots closed with a blessing of the new rink. Refreshments, including a miniature cake replica of the arena, were served following the dedication.