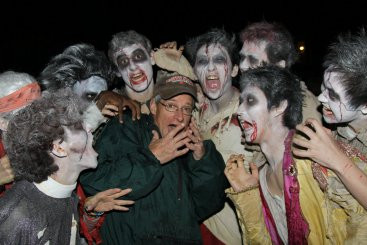 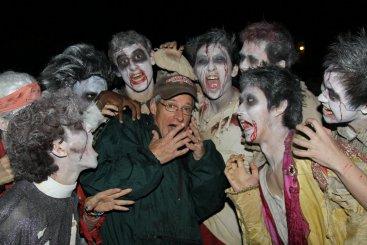 “Darkness falls across the land. The midnight hour is close at hand. Creatures crawl in search of blood, to terrorize your neighborhood…” These words are very familiar to people across the world, especially at this time of year. But this Halloween, students from South Kent School brought Michael Jackson’s “Thriller” to life.

“The group has been practicing the ‘Thriller’ dance since early September,” Call to Explore Director Cheryl Moore said. “The group is lead by Jack Huang, of course!” Jack (Chao) Huang ’13 is a talented dancer who has choreographed multiple group dances in the past for South Kent’s Call to Explore Affinity Group. Although the movements come easily to Huang, he explained that teaching others is not quite as simple. “I’m a dancer but not a teacher, so in the beginning I was a little bit frustrated since people didn’t fully get it the way I do right away,” Huang said. “But I learned that by repeating the steps, the other guys were able to catch on. When they finally got into full costume and makeup, they really got into character.”

Jeff Charles ’14 echoed Huang’s sentiments, but from a student’s perspective. “I had never danced before so it was hard at first. I had to practice in my dorm to make sure I knew the steps,” Charles said. “But I wanted to challenge myself since I have never done this before. In my costume, I felt like a professional.”

South Kent’s “Thriller” dancers made a debut performance for Fall Family Weekend on October 18 and then danced again for their peers on campus on October 29 before the school’s annual Haunted House event. The main event occurred on Main Street in Kent on Halloween night, October 31. The town of Kent’s Mob Dance, which was sponsored by Heron American Craft Gallery, invited anyone in the community who wanted to participate to be part of the “Thriller” dance. After coordinator and instructor Wanessa Anderson saw the South Kent boys practicing, she asked them to headline the event.

Regardless of the rainy weather, throngs of people filled the street for the Halloween celebration. “I have never been nervous before, but when I got to Kent, I was nervous,” Charles said. But Huang chimed in, “Once we were dancing, we felt like champions.” After South Kent did a solo rendition, the music was looped back on and multitudes of others joined in. “An estimated 500 people watched the performance,” said Lynn Mellis Worthington in the Republican-American newspaper. “The group of zombies lurched and dragged themselves around and then snapped into precision dancing,” Worthington said in her article.

And this is not the last you will see of the South Kent student dancers. Although Affinity Groups rotate throughout the year, Huang will remain in the Call to Explore as a choreographer and will bring the art of dance to others through the rest of his senior year.

Students from South Kent’s Advanced Media Group (AMG) were present and video of the performance is coming soon!
For more photos of the event, view the full album here.