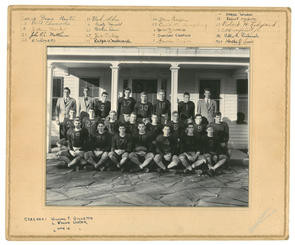 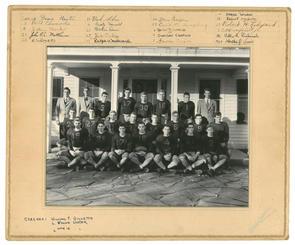 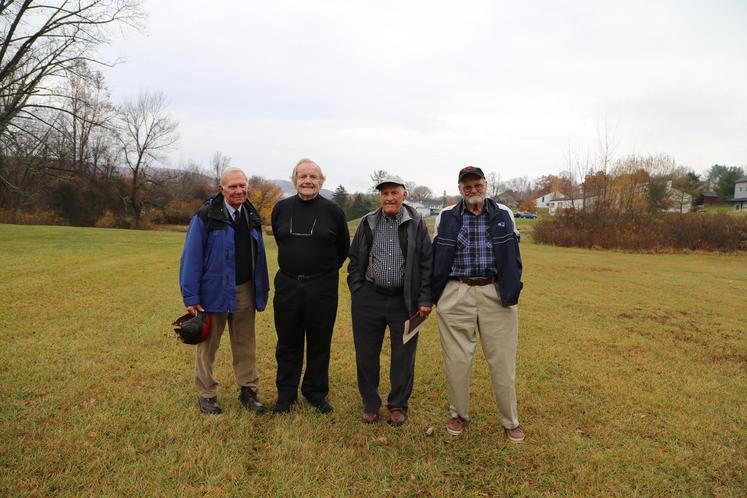 Today four members of the 1946 football team came back to the Hillside to commemorate the 70 year anniversary of their victory over the Gunnery on November 9, 1946.  Noble "Nobby" Richards '49, Richard "Dick" Aiken '48, William "Bill" Edwards '47, and Ralph Woodward ’47 spoke to the whole student body about their victory over the Gunnery’s football team and to talk about the importance of teachers/coaches, friends, and the school in their lives. Students were told about how both the SKS and Gunnery teams had gone undefeated in their seasons, with the Gunnery team actually having had no points scored against them, when they met on that fateful day here on the Hillside. Students, faculty, fellow alumni were equally entertained by the tale of that historic game. The victory over Gunnery, and bringing home the Gunnery Cup remains to this day a momentous point in the school's history and also in these men’s lives. 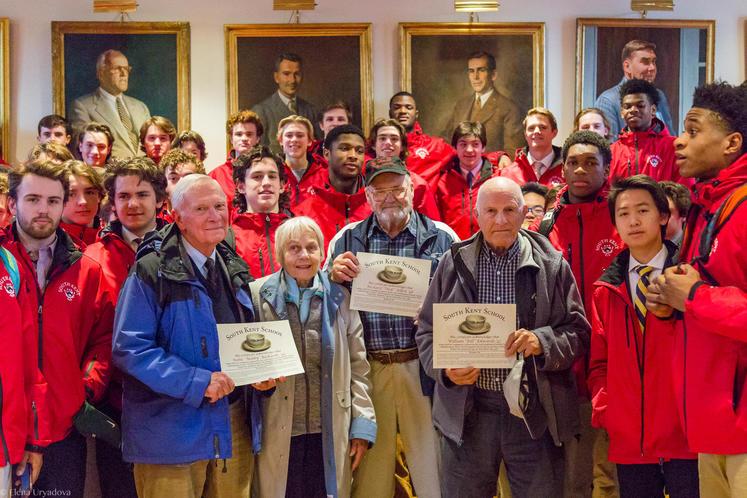 The 46 football team with current students

From the Students and Faculty we thank you for taking your time to come back to the Hillside and sharing your stories with us. 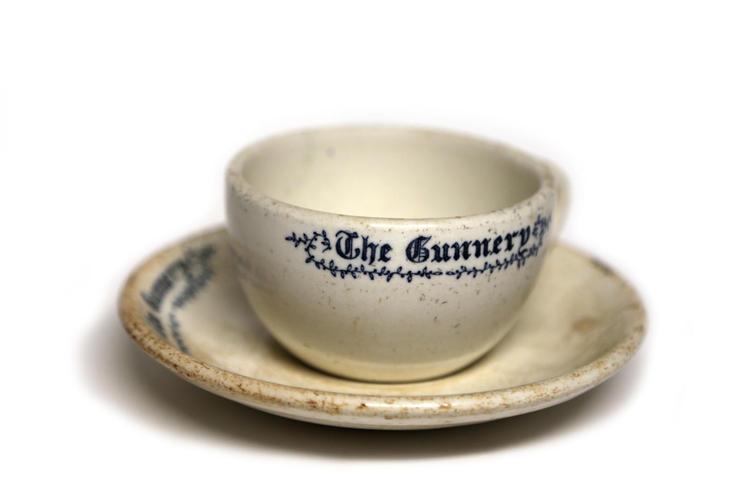 This modest cup is the symbol of the friendly football rivalry between The Gunnery and South Kent School. The rivalry extends to the year 1917, when Samuel Bartlett, one of South Kent’s founders, played against The Gunnery as a member of the Kent School football team. Kent could do no wrong that day, gunnery could do little right, and the final score was Kent 54, Gunnery 7. At the traditional tea after the game, a Gunnery teacup disappeared into the pocket of a Kent player.

In 1934 Mr. Bartlett, now Headmaster at South Kent, proposed to Gunnery Headmaster Hamilton Gibson that the teacup, which had propitiously reappeared, be awarded annually to the winner of the Gunnery-South Kent football game. The teacup has traveled between the two schools numerous times, but no one can say at which school it has spent the most time.

Below is an excerpt about the game from the memoirs of John Matthews ’47.

"While we had lost most of our football games the previous year, we won game after game in the fall of 1946, even though several of them were only by two or three points.  The Gunnery, our archrival, had an even more successful season, beating teams we had just barely defeated by wide margins.  We had beaten Salisbury, for instance, 14 to 12; they by 34 to 0. They had a number of postgraduates playing, and they outweighed us by about 12 pounds per man.  And we were reliably told that they had already ordered their gold footballs in anticipation of trouncing us. Fortunately the season-ending game was played at South Kent, and fortunately we had a coach in Bill Gillette who was both smart and inspirational.  He drilled us in a number of special plays including an onside kick which no one had ever seen before or, I imagine, since.  Instead of kicking the ball slantwise into the air he had the boy holding the ball shift it at the very last second to a flat position where the two ends were pointing to the sides of the field. Then the kicker, Dave Humphrey, had to just click the top of the ball lightly with his cleats and the ball would roll like a soccer ball straight forward.  Dave then was to run directly over the
ball and when he saw the second white stripe, fall on it.
We played our hearts out, but by half- time Gunnery had several touchdowns and we had none.  During the halftime Bill Gillette gave us a fiery talk ending up saying, “Gents, a team that won’t be beat, can’t be beat!”  We all emerged chanting that mantra under our breaths.
In the third quarter Duane Newton, our other linebacker, and I had the satisfaction of tackling their 210-pound fullback,
Ratcliff, as he tried to cross the line of scrimmage.  Newty hit him high and I hit him low.  Two Gunnery players had to come in and half carry him off the field. He never returned.
Finally we scored, but as the fourth quarter began, the score was 20 to 6 in favor of Gunnery.  Then everything clicked. We scored and the onside kick we tried after it worked like a charm. We scored again.  Gunnery, which had never faced so determined an opponent, began to fall apart.  With less than a minute to go we had the ball on about their 30 yard line.  I took the ball on a reverse through the middle of the line for an 8-yard gain.  The next play had been planned and we took no huddle, catching Gunnery off guard.  Johnny Clark threw a pass to Rusty Hansel who had stayed on his side of the field and not come back into a tight line-up.  Quickly he was behind their safety and across the goal line, winning the game by 25 to 20. As the New Milford Times wrote the next day, “A cheer which must have been heard from Kent to Gaylordsville rocked the South Kent stands.”  But there were still some seconds left to play.  South Kent kicked off and Gunnery ran it back to midfield.  There was time for just one more play.  One Gunnery back went in motion to the far side of the field.  The quarterback then threw a 25-yard overhand pass laterally across the field to him. He, in turn, threw a 50-yard pass down field to an end who caught the ball behind our safety, Birdy Edwards.  Birdy ran like hell, caught the guy’s shirt and pulled him down inside the South Kent ten-yard line. The game was finally over.
None of us who played in that game and nobody who saw it will ever forget it.  Even today it remains one of the proudest moments of my life.
The hockey season wasn’t bad: we beat Taft twice and Hotchkiss once and nearly beat Kent.  All of these schools were three times our size, and we beat enough schools our size to have a winning season, which is all a captain can hope for.  But none of them came close to that Gunnery football game.
I recall the crew season being less successful, though we did place fifth in the finals at Quinsigamond (Worcester, Massachusetts) which was the equivalent of the New England schoolboy championship.  We spent the night before in the Bartlett home in Brewster on the edge of Lake Chargaugagoggmanchaugagoggchaubunagungamogg, which we all learned both to pronounce and spell. (In Algonquin it is supposed to mean: “You fish on your side of the lake, I’ll fish on my side and we’ll both fish in the middle.”)"