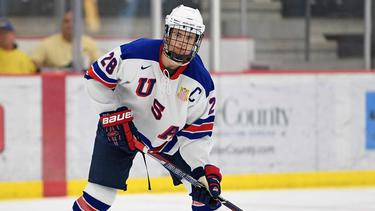 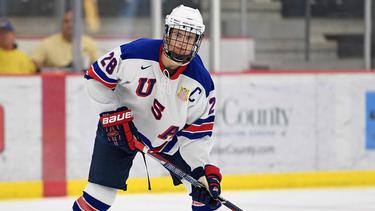 Joel Farabee ’18, a previous Selects Academy at South Kent School left wing, is getting noticed by the National Hockey League (NHL) for his hard work. NHL correspondent Joe Yerdon wrote an article on Farabee, noting that despite his “small stature” compared to some others in the league, “he has earned an A rating on NHL Central Scouting’s preliminary players to watch list as a potential first-round pick” for the 2018 draft.

"Joel is a very good puck mover with outstanding vision," says NHL Central Scouting's Greg Rajanen. "He shows creative puck plays consistently. He has a quick release and can snap the puck with pace. He's hard on pucks in all areas of the rink. He has a high hockey IQ with good offensive instincts. Joel is a leader on his team setting an example with hard work and team play in the games that I have seen."
Devin Rask, Director of Selects Academy at South Kent School, adds: “I’m excited for Joel. Like the article says, not only is he talented but he is one of the hardest working players I know. He is committed to getting better and wants to succeed. What separates Joel from others is he is not satisfied with being good; he wants to be great and he puts the work in to get there.”

NTDP coach Seth Appert adds, "The best thing about Joel is that he competes so hard, and he goes to the areas most people don't want to go to, and he scores tons of goals at the front of the net."

With all of his successes thus far, Farabee is keeping his head in the game. "I'm not even really thinking about the draft, I'm just focusing on what I need to do," he says. "I just try to focus on myself and what the team needs to do to win, and how I can get better each day.”