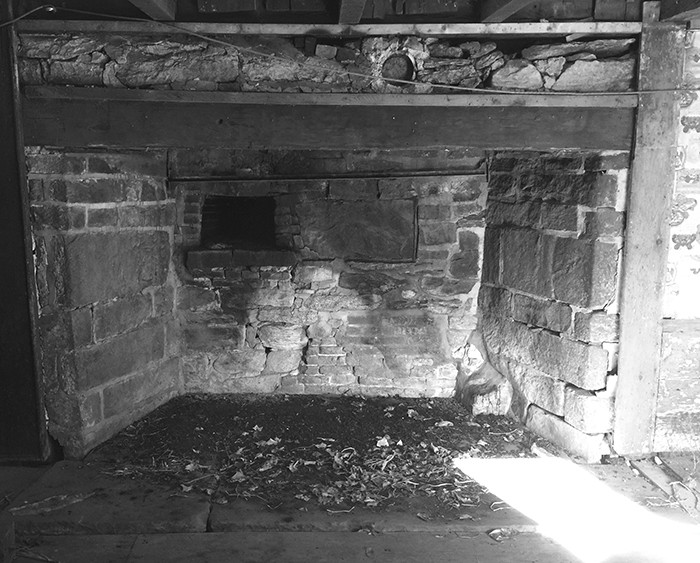 The King of South Kent

Reposted from the Kent Historical Society. The Hatch House is on South Kent School’s North Campus.

The King of South Kent

By Marge Smith and Jeff Morgan 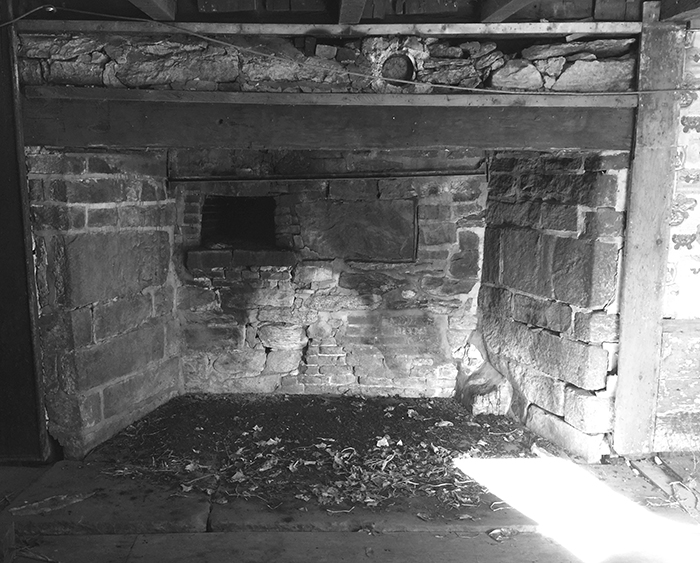 The magnificent kitchen fireplace at the Barnabus Hatch house - at over 9' it was the center of life in the house.

The need to straighten out the mysteries of early Kent land ownership has become somewhat of an addiction for the two of us. We have a large copy of the original division lots map hanging in the office, and it’s way too easy to lose track of time as we ponder and puzzle what we’re seeing. In mid-August, Jeff was drawn to two unusually large lots in the southern end of Division 1in South Kent. We knew they’d been bought in 1740 by Barnabus Hatch, along with two other lots in the eastern part of town. But they seemed way out of proportion is size compared to most of the other lots in town. So we headed to our other hangout – the vault at the Town Hall where we could look at the deed descriptions of the lots to see if they provided any clues. They did!

The lots were actually two parts of Lot 51 in the First Division. They were on either side of today’s South Kent Road, though not right opposite each other. In checking the boundaries of both parts (always a good place to find clues), we discovered that Barnabus had also bought Lot 40, which was also in two pieces; one on either side of the road, this time opposite each other. The western section of Lot 40 abutted the section of lot 51 on that same side of South Kent Road. And, he had bought a 37’ wide sliver of land on the other side of that section of Lot 51. There had to be a story here! Our heads were spinning!

But we were in luck this time – we didn’t have to start from scratch. Several years ago, after South Kent School bought the old Arno farm at the north end of Hatch Pond, they hired Melanie Marks of Connecticut House Histories to research the ancient farmhouse, which we all knew had been Barnabus’s large home. Melanie and her partner Morley Boyd spent months researching the Hatch family origins in America and tracing their migration from Dorchester, MA, to various other towns, finally arriving in Kent from Tolland, CT. While most of her research focused on all the families who had lived in the house up until the sale to the school, her time in the Kent Land Records has been invaluable to us. We could see all the land around the new town that Barnabus had bought and sold, and picking up where she left off, we began to see the empire he was building in South Kent. 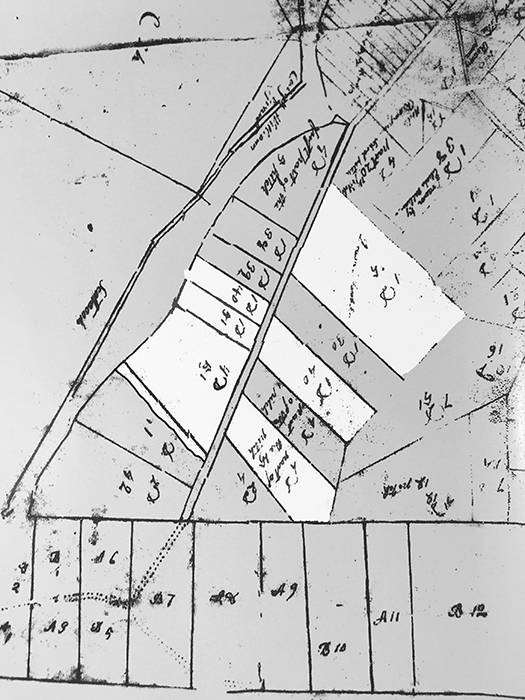 Still, why would he need SO much land? He had the two big parts of Lot 51, maybe over 500 acres – that should have been plenty to start his new life with. But when we went back to staring at the map again, Jeff had an epiphany. When he explained it, a check of the Google satellite map seemed to confirm it. We zoomed in and out over the areas of Lot 51, and quickly decided that they were mostly water!  They were Leonard Pond and Hatch Pond – no wonder he needed more (dry) land! With that, the full story of Barnabus and his “mansion” became clear. 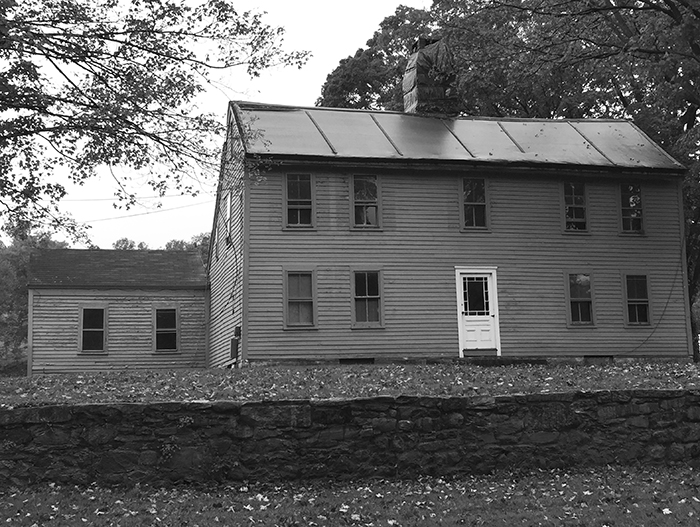 The Hatch House as it stands today, the largest first generation house surviving in Kent.

Melanie had proved that Barnabus first built a small log cabin farther down South Kent Road, and we actually had found the foundation in the woods, on what we now think was the eastern part of Lot 40. The 1798 CT Direct Tax form showed that the Hatches had two houses, one small and one large (with exactly the dimensions of the existing farmhouse). Melanie’s theory quite rationally is that Barnabus lived in the small house while he cut and prepared the timbers for the big house, which he would need since his family was rapidly growing. He probably lived here alone in the log cabin at first, while his second wife and his young children from his first marriage stayed behind in Tolland in 1740. But eventually they came to Kent and soon the family welcomed more babies to fill the big house that he had created.

Barnabus was wealthy. As a young man in Tolland, he had already amassed quite a fortune which he used to buy the various pieces of land in Kent before moving here. His property stretched for close to two miles along South Kent Road. In fact,   he had quite an empire in that part of town! By the time he began to build the big house, the King of South Kent was worth £1,225, which is about $254,000 today. At one point he was the sixth wealthiest man in Kent, with the large farm on Hatch Pond as well as real estate investments elsewhere. His cousin Timothy was the wealthiest and most powerful, being a selectman, justice, town moderator and agent to the General Assembly. Barnabus too was involved in town activities, being elected to the important post of Surveyor of Highways, and being appointed to negotiate issues that needed settling.
He died in 1781 and his will reveals an estate of a successful farmer and a good provider. He spelled out in great detail what he wanted his wife Phebe to have, which gives a very clear picture of what was going on at the farm. It included cows, sheep, flax, wool, wheat, Indian corn, bees, pork, beef, cider, and “all the apples she wants from the orchard.” He also left her a side saddle and bridal, and instructed his son Nathaniel, the executor of his estate, to maintain the best riding horse for her use. He described the areas of the house to which she was to have legal access: “the use and improvement of the south room in my house, and the chamber and garret over said room, and the cellar under said room, and one half of the kitchen and one half of the buttery for her use and improvement during her natural life.” He also left her the use of a small chamber that they had added to the south end of the main house.  This description paints a clear picture of the layout of her part of the house as it was then and still exists today. 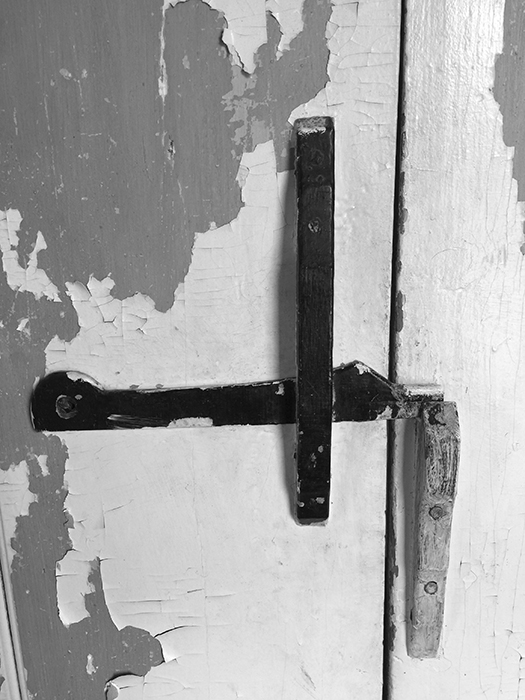 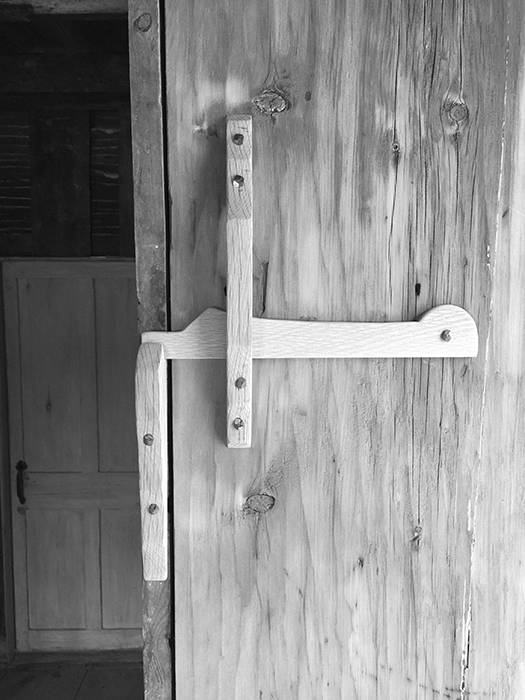 At left, the original latch on the attic door in the Hatch house. Right, the reproduction latch made by Mark Peterson for the attic door at Seven Hearths.

The remainder of his estate went to Nathaniel, and it is Nathaniel’s probate inventory that really shows what wealth and good taste the Hatches had. The house was furnished with six bedsteads and over 30 chairs, which is extraordinary. They had 30 sets of sheets and many other linens; lots of cups, plates and other cutlery, including silver spoons; three looking glasses; 7 brass kettles; a clock in case; two pairs of spectacles and many books – mostly church related; a chess set and much more. The inventory also included beehives, a case of gin bottles and 20 barrels of metheglin, which is a form of mead – an alcoholic drink made from fermented honey and spices, and in many cases, hops. There are still hops vines growing along the road just south of the driveway into the farmyard, and they probably are Hatch Hops!

If Barnabus could come back to his old home today, he might be pleased, though a bit puzzled by what is going on there. South Kent School is farming the property again, growing crops, raising goats and chickens for their milk and eggs. Many of the students are involved in the farm operation, but not in the way that Barnabus’s children and grandchildren probably were, by necessity. Today’s kids in general probably never think about where their food comes from, but at the Hatch farm, the SKS students learn the process from start to finish, so that when they sit down for a meal in the dining hall, they can proudly say that they raised the peas and carrots on the plates in front of them.

Posted in the category Alumni.

This is awesome! Please keep the stories coming. I love it.